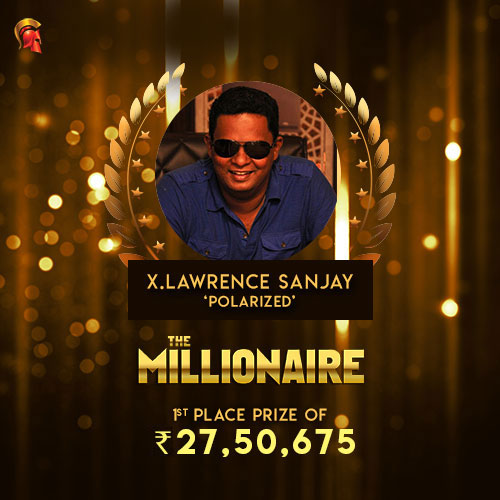 
TheSpartanPoker introduced its signature Millionaire tournament last year in the month of September with INR 10 Lakhs GTD for 1st place. Over the course of time in the month of January this year, that was increased to INR 20 Lakhs GTD to 1st place. The sheer success of this tournament was clearly evident when in the month of March, the site made it INR 20 Lakhs GTD for 1st place and INR 10 Lakhs GTD to 2nd place. As part of their month long Diwali celebrations, a Diwali Special Millionaire with INR 1 crore GTD prize pool was announced. Not surprisingly, India’s biggest online poker tournament received an overwhelming response from all players across country with a total of 2341 entries coming together to easily beat the INR 1 CR original guarantee eventually making it a prizepool of INR 1,17,05,000! The man of the hour, and indeed the weekend, was Coimbatore based poker player Lawrence ‘polarized’ Sanjay who shipped this mega Millionaire tournament for massive first place payout of INR 27,50,675.

The big news is that the next Millionaire tournament too will offer a 1 Crore GTD prizepool and this will take place on 10th December 2017 at 4:30 PM. One can enter the tournament with a buy-in of INR 5,500 with a starting stack of 15,000. Players can also win a seat in this tournament via playing satellites and get into this high-value tournament. Mark the date on your calendar and get a chance to be a Millionaire overnight only on TheSpartanPoker!

Coming back to the latest and biggest Millionaire winner, Lawrence Sanjay outlasted ‘eemansingh’ in heads-up battle who took home INR 14,63,125 for the second-place finish. 45-year old Sanjay is a James Bond fan and not surprisingly poker got him hooked from the time he saw the movie Casino Royale. The poker scenes from that attracted him and that was his start. He kept up with good poker practices to know the basics of the game and expand his knowledge. Eventually he found himself in Goa for his first live experience playing poker onboard the floating ship Casino Royale. Besides poker Sanjay loves other table games like baccarat where he has made excellent scores. He also likes to travel and what better than poker which came into his life, as a means to do just that!

He plays poker for part-time and is not very regular in the online space but playing live with friends is his first choice. He has made regular visits to international tournaments which have taken place in Asian destinations like Macau or Manila for the live tournament series which have taken place there. He is also regular at the World Series of Poker (WSOP) in Las Vegas which he visits along with his friends.

Besides being a recreational poker player, Sanjay operates a solar company for main source of his livelihood right from his city Coimbatore in Tamil Nadu. He has political aspirations too and intends to enter that field in the future if given the right opportunity. “I would like to thank Deepak Gupta and Dinesh Butcha for their love and friendship,” said Sanjay in a shoutout as he says goodbye to us. 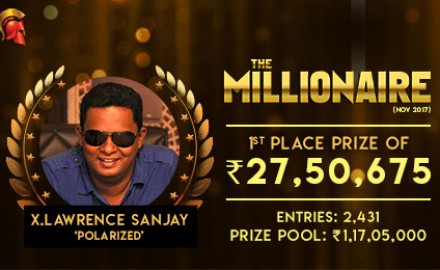 As for our runners-ups, the mysterious and unknown ‘eemansingh’ has been on a hot streak off late having had a great performance in the recent Spartan Super Series (SSS) – Platinum edition shipping the PLO HighRoller (15L GTD) (RE) for INR 7,12,500 as well as the Mega Stack (12L GTD) (RE) NLH for INR 3,24,120.

The third-place finisher is not new to the poker world either as Siddharth ‘schemer77’ Karia who collected INR 9, 48,105, has previous had a title win in the July edition of the India Online Poker Championship (IOPC). Karia shipped IOPC #32 INR 3,300 (500K GTD) (RE) for INR 1,98,000. 25-year old Karia is an MBA from Boston who also came second in an Asia Championship of Poker (ACOP) side event in Macau. Speaking to Gutshot he said, “Thrilled with my 3rd place finish. My AT ran into KK and couldn’t improve. Loved the Millionaire structure, all the players were deep at the final table. Cheers!”

Many congratulations to Lawrence Sanjay and all the ITM finishers and good luck to all for the next Millionaire.