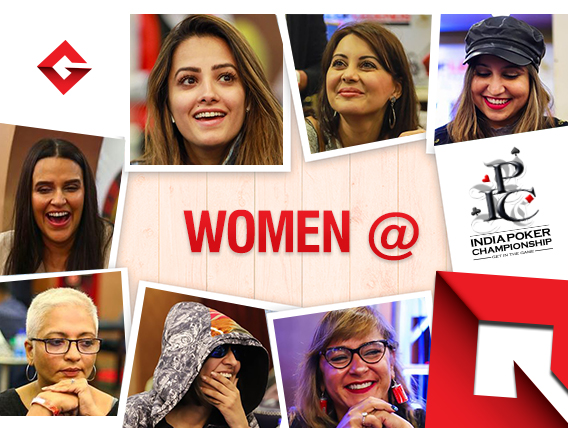 
The general misconception in our Indian poker industry is that it’s a male dominated sport and we’re always pushing to get rid of this myth. When we look at achievements on the global scale, Nikita Luther won us a WSOP gold bracelet in 2018, becoming only the second Indian to do so after Aditya Sushant in 2017. Like her, quite a few female players are killing it online as well as live.

With the India Poker Championship (IPC) just wrapping up in Goa’s Big Daddy Casino, let’s throw some light on some of the ladies who played and did well at this series. IPC as a brand is always pushing for more female participants and they even gave away the Last Lady Standing award to the female player making the deepest run in each tournament, which included goodies from online giant Spartan Poker and merchandise brand, Poker Stuff India. Let’s take a look at each of these individual tournaments and the winner of these awards…

315 entries registered and Delhi’s Deepanshi Tomar ran good enough to finish 12th in the IPC 10k Kickoff. Just before this series, she finished on two final tables at the Baazi Poker Tour and she clearly wasn’t happy to have missed another one at IPC. We caught up with her after her run in the Kickoff and she said, “This past month has been my first experience in live poker. I’ve been playing a little online and I’ve been doing some studying as well, and my recent results are just a reflection of that.”

Talking about the lower number of women players in our industry and how to increase that number, she said, “I’ve been motivating myself and I’d suggest all women poker players do the same too. We don’t need others to motivate us. Good luck to all of you and I’ll see you at many final tables to come. It will be a great moment if many more girls come and join this game.”

See our complete conversation with her at IPC Jan 2020:

This was the highest buy-in tournament of the series and quite a few female participants were here too, though none managed to make the money. The Last Lady Standing prize wasn’t announced in this event but we’re guessing it was PokerStars Team Pro Muskan Sethi who made the deepest run, and we don’t have to tell you how good an ambassador she has been for females playing this sport in India, also winning a President’s Award for the same.

Another woman who impressed with her play at the 100k Highroller was Bollywood actress Anita Hassanandani who was stacking up big time on the featured table, but was unfortunate to bust out towards the end of Day 1 of the tournament. Speaking to her about the India Poker Championship, she said, “I think I’m glad that I was introduced to IPC. It has been a great experience. I love the way it’s so professionally organized with some brilliant players. Poker now is a sport and in India, it’s getting bigger by the day. I’m glad I’m a part of it and 1000% I’ll be back for IPC the next time as well.”

See our complete conversation with her during IPC Jan 2020:

This was the crowd favourite – the 50k Main Event, which was going to crown the 2020 India Poker Champion! Eventually, it was Delhi’s Rubin Labroo who went on to bag the title but so many women made a lasting impression in this tournament, none more than Sarala Ramakrishna, who won the Last Lady Standing award for finishing 15th in the Main Event for a prize of INR 4.1 Lakh. Interestingly, she also won the same award in IPC September 2019, for finishing 17th in the 100k Highroller back then. In the same tournament, Dr. Akanksha Singh also made a deep run, finishing 22nd in the Main Event, after finishing as one of the top stacks in starting flight Day 1A. About her time at IPC, she said, “I had a wonderful experience at the IPC Jan 2020. IPC has always been my favourite live poker tournament series because they are very player friendly and the atmosphere is always full of glamour and fun. They have the x-factor attached to them. I always see them promoting ladies to play poker.They are Salman Khan(Big Boss) of the poker industry.”

The bounty tournament was the last of the IPC Jan 2020 series and while no woman made the money, it was one of TV’s most loved actresses Aditi Bhatia who won the award for Last Lady Standing, busting just before the money bubble. There were a number of other women participants spotted on the tables through the series including Nisha Sareen, Shruti Sinha, Neha Dhupia, Minissha Lamba and others.

“I enjoyed the glitz and glamour at the IPC Jan 2020 series! As always, playing live poker was a blast! Thrilled to see how IPC has evolved and wish the IPC Team all the very best going forward,” said Maria Kirloskar, former PokerBaazi Pro, about her experience at the series, where she played only the Main Event.

“It was another amazing IPC tournament series… We’ve been in the casino for 5 days straight but hey, it’s been a good week. Some advice to everyone would is to be nice to the dealers – it’s not their fault when your aces get cracked – they aren’t magicians or Bollywood ke khiladi. And women players are not fish here to swim in the tournament, but we’re here to steal your chips,” said Deepika Agarwal, a regular face at IPC tournaments right from the early days.

“My experience at IPC Jan 2020 was great. It was an amazing start to the year. We saw a lot of female participation in the largest tournament that has occurred in India till now. Both from the perspective of participation and the level of the tournament, we are surely getting closer to where we want to see poker in India, but we do still have a long way to go.
Personally, it was a great experience as I managed to cash in the IPC Main Event and the experience of crushing with so many players was exhilarating,”
said the Delhi based Kanchan Sharma.

By the time the IPC comes around for another edition in Goa, we’re expecting several more female faces to hit the felts and who knows, some may even take home a title or two! For all updates from the IPC and other tournaments from across India and around the world, stay tuned to GutshotMagazine.com.