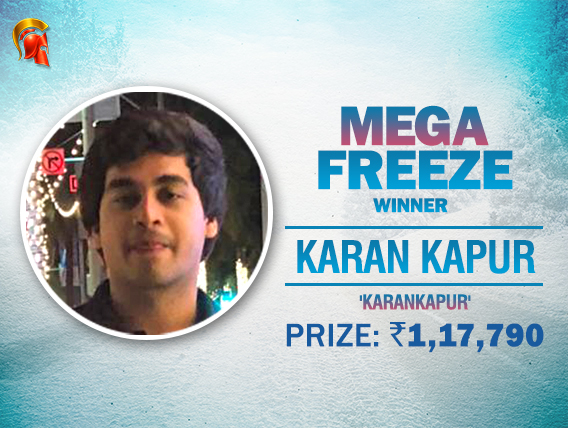 Last night’s Mega Freeze INR 6 Lakhs GTD had attracted a field of 135 entries, each putting in the buy-in of INR 5,500. The guarantee was surpassed, and the created prize pool was INR 6,75,000. The tournament had paid top 20 places.

After a long grind of over 5 hours, which began at 7.30 pm and ended today at 12.45 am, the winner to emerge was Karan Kapur aka ‘karankapur’. He took home INR 1,17,790 beating the 135 entries as 1st place prize money after a 4-way deal that happened between on the Final Table.

Known online grinder Pranay Chawla aka ‘setmeup’, who had also won the #18 event in Jan’s IOPC, bagged the 2nd biggest cash prize of INR 1,11,820. Sagar Choudhury aka  ‘Strangeplay’ filled the 3rd position for INR 88,724 and ‘Crimemastergogo’ rounded the top 4 for INR 88,192. Although the 3 other players didn’t bag the Mega Freeze title, their cash prizes are similar and wouldn’t be dissatisfied with the deal.

Coming to the champion, Kapur is a Delhi-based poker enthusiast who was introduced to the game by his college friends back in 2017. He is just 22 and this win comes at a time when his potential to grow is enormous, which is a great boon to him.

We had spoken to him when he made good use of Spartan’s Rewards Plus program earlier this month and had good things to say about it. He had even won an iPhone XS on Spartan before, winning SSS DareDevil back in October 2018. With this Mega Freeze win, he has deepened his roots in the community, and it wouldn’t surprise us if he wins some more titles moving on.

Keep reading GutshotMagazine.com for more such tournament results, roundups as well as for your daily updates on general poker news from around the world.