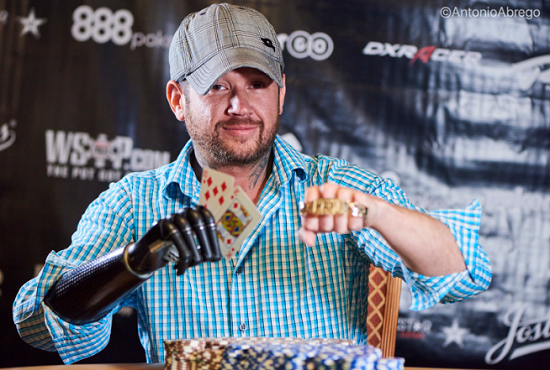 
The 2018 World Series of Poker began more than a month ago and Event #6: $365 GIANT No-Limit Hold’em was one of the first tournaments to kick off in the series. A low buy-in tournament (smallest of the tournament) saw a whopping field of 8,920 entries registering, accumulating $2,676,000 in prize money.

It took a while to decide a winner of this tournament – one month, to be precise. Each day of the tournament was played only once a week and after 5 starting flights, Day 2 and Day 3 of the tournament, USA’s Jeremy Perrin was crowned the winner, taking home $250,966 for first place.

“I feel pretty good. I actually thought it was the PLO GIANT and then I got two cards instead of four, figured I might just ship it,” said Perrin after winning the tournament, surrounded by his friends at the winner’s interview. He also spoke about how he had added incentive to win it, having make a prop bet with a friend.

He began the final table with just 19 big blinds and did brilliantly to make a comeback and ship the tournament. “I didn’t play a hand for two hours. Honestly, I played for sixth place, then I wanted to make third, and then for the win,” he said. He took home a career-best prize and so did Puerto Rica’s Luis Vazquez, who finished in second place for $155,478.

Keep reading GutshotMagazine.com for a regular update on WSOP tournaments as well as other poker tournaments from around the world.