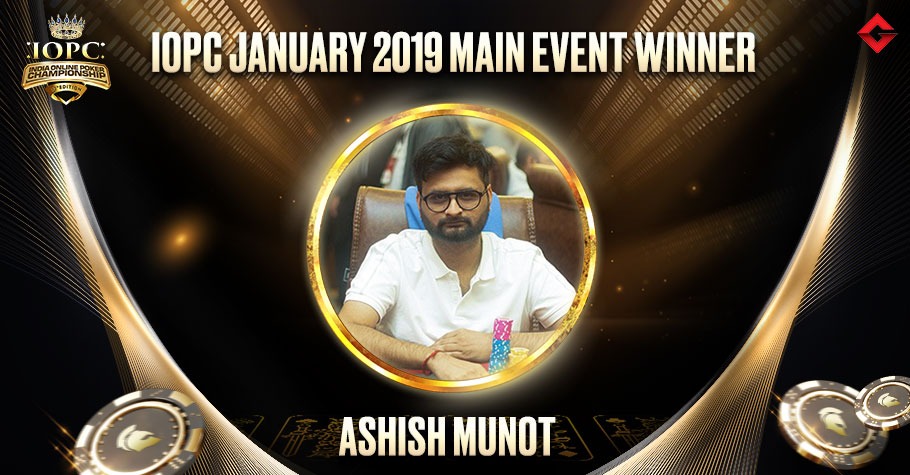 
The Main Event (ME) of any poker series is always a special one. And why not?! The ME is the most highly anticipated among players across the globe. And the India Online Poker Championship (IOPC) is no different, every IOPC, we all have our eyes on who would ship the coveted ME—The Crown featuring a massive guarantee, that keeps getting bigger every year.

Let’s have a look at the past IOPC ME winners who have made history by adding the coveted title to their credit. In this article, we will talk about Ashish Munot—IOPC January 2019 Main Event champion.

Who is Ashish Munot?

Ashish Munot is a well-known and respected name in the Indian poker fraternity. He has more than 40 titles to his credit including several international, and online titles. As per Hendon Mob data, Munot has live earning worth $136,021 and counting. Additionally, he ranks 48th in India All Time Money List.

Munot overcame a massive player field of 1,354 entries to clinch the title. The field eventually condensed down to the final nine and ultimately two players, namely Munot and Ram Kakkar battled it out in heads-up. Munot who claimed the winning title after defeating Kakkar, took home a pay cheque of ₹37,50,000, from a prize pool of ₹1.5 Crore GTD at the ME. The final table (FT) of this tournament included notable players like Deepak Bothra, Bibek Karki, Apratim Sharma and Sajal Gupta among others. The top 120 players in the ME got paid and the min-cash stood at ₹30,000.

One of Munot’s biggest online victories includes the FTS 3.0 Double Stack title for ₹4.91 Lakh. He also has a number of Final Table Series (FTS) titles. Apart from this, the popular grinder also has several cashes and titles from featured tournaments like Destiny, ReCharge, among others to his credit.

Unfortunately, we won’t be able see Munot grinding at the WSOP series this year, however, looking at his form, we’re sure this grinder will ship some IOPC titles.