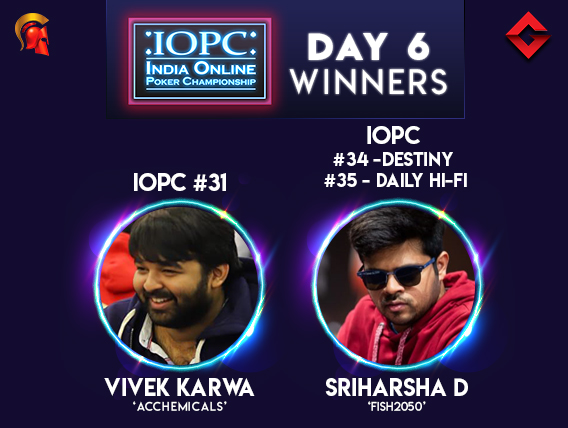 
It is Day 6 of the country’s biggest poker series the 2020 India Online Poker Championship (IOPC) inking an incredible end last night. Fate was in favour of India’s upcoming poker star, Sriharsha D popularly known as ‘Fish2050’ securing three titles in the ongoing series. So, let’s rewind and have a look at the title winners on IOPC Day 6…

The buy-in of the first tournament was as low as INR 550 which ended up registering a total of 881 players. Before the tournament came to an end, the top 63 finishers profited for the prize pool, walking out with their min-cash of INR 1,957. A well-known circuit grinder Vivek Karwa aka ‘acchemicals’ rode past the field to kick-start IOPC Day 6 after beating ‘Modesto23’ in heads-up. Turn 2h proved beneficial for Karwa, finding his second pair and flipping over Fours and Twos to eliminate ‘Modesto23’ to the second position.

Gutshot caught up with the champion who stated, “My game has improved because of the mentorship of Abhishek Goindi and Tanay Hargunaney and their constant belief in me is the driving force!”

Next in line was Afternoon Hi-Fi whose buy-in climbed up to become INR 1,100 yet attracting 503 players. The guarantee crossed the advertised prize pool to become INR 5.03 Lakhs and a min-cash was given out to the top 39 players earning INR 3,470 as min-cash. The second tournament of the day halted with a heads-up deal in level 37, with ‘riverismine’ carrying the largest stack of 2 million pushed Ishaan Bhatia aka ‘potripper16’ in the runner-up position.

Once again, the buy-in slipped to become INR 550, luring 637 runners to cross the guarantee and become INR 3.18 Lakhs in the prize pool. Out of this number, the top 47 finishers earned a min-cash of INR 1,815, but the one to walk out with the biggest portion was Nachiket aka ‘psyberlyon’ who dominated the opponent ‘TrumpCard’ by tossing over two pairs of Queens and Jacks while the latter ended in the runner-up position with his single pair of Five.

Sriharsha D is ending the first month of 2020 quite well after already shipping last week’s IOPC Event #12 Mega Freeze INR 10 Lakhs GTD here he is once again, outlasting a field of 896 entries in Spartan Poker’s featured tournament Destiny 13.0 INR 30 Lakhs GTD and grabbing his seat to battle in the Destiny SnG Finale. Sriharsha bagged his second title after the players settled for a heads-up deal and with that Abhishek Kumar aka ‘allout1’ secured the second place. To read more on the champion’s win, click here.

Seizing IOPC Mega Freeze and Destiny wasn’t enough that the champion rode past the field to grab his 3rd title of the ongoing series. Day 6 ended with Daily Hi-Fi being the final tournament registering 636 players with each one chipping in INR 3,300 buy-in. Who would have known that the 2020 BPT Kick-off Event runner-up would kill it thrice! And right now, he is top the name in the IOPC tournament leaderboard with a massive lead over the rest. Playing under the username ‘Fish2050’, Sriharsha eliminated ‘tullupump’ in the second position after the players struck a heads-up deal. If the champion maintains his position throughout the IOPC series, he might seize the stunning MG Hector! Check out the IOPC leaderboard ranking after Day 6: