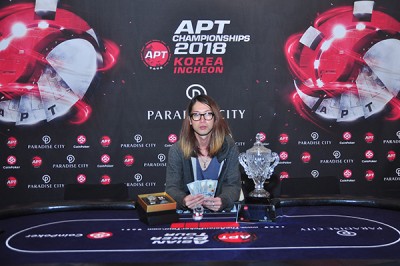 
The 2018 Asian Poker Tour (APT) Korea Incheon Championships concluded at Paradise City Casino, with quite a few winners crowned over the course of 12 days between 8-19 August. 22 events were hosted in all, with a participation of over 1,600 entries representing over 20 countries from around the world.

This was a very successful stop in Korea, with nearly KRW 1 billion given away in cash prizes. Some of the highlight events were the APT Main Event and the APT Championships Event, which ran for 5 days each. Japan’s Iori Yogo shipped the Main Event, while the Championships Event title went to USA’s Jaepil You.

Now, apart from these two tournaments, there was one prize that everyone had their eyes on and that was the APT Player of the Series award, which went to the most consistent player of the series. Once again, it was a Japanese player in Inotsume Kazuma who took home this award.

Kazuma hasn’t been around for too long, having shipped an ACOP Flipout Event in Macau in 2016, before getting his next few cashes here in Korea. He made a total of 6 cashes here, and that’s how he managed to pick up 953.28 points and win the APT Player of the Series, quite comfortable eventually, winning the APT POS Trophy, the APT POS customized ring, a luxury Meister watch and $800 in prize money.

Keep reading GutshotMagazine.com for more updates on the Asian Poker Tour, which will have its next stop in Macau.