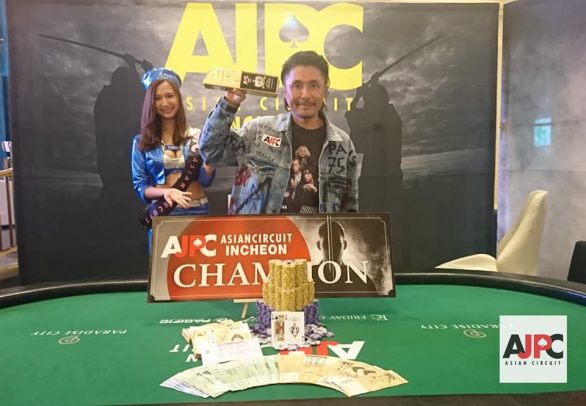 
The All Japan Poker Championship (AJPC) Asian Circuit hosts regular live poker tournament series across Asia, and very recently, they were back with another stop at Paradise City Casino in Incheon, South Korea. 26 tournaments were lined up between 5-14 October in this series, with plenty of prizes being given away during these ten days of play.

This being a Japanese tour, the fields were mostly Japan-dominated. However, the prizes weren’t all taken home by Japan players. In fact, it was China’s Xing Biao Zhu who ruled the series, winning a record 5 titles out of the 26 tournaments, while also cashing in another five events.

However, one tournament that Zhu couldn’t get through in was the KRW 1,100,000 buy-in Main Event, that attracted a total field of 95 entries, creating a prize pool of KRW 92,150,000 (~$82,000). This tournament was a Final Table which was almost complete Japan-dominated, and Japan’s Hirokazu Kobayashi took down the title, defeating Eun Yul Yee in heads-up.

Along with the prestigious AJPC Main Event trophy, Kobayashi also won KRW 26,262,800 (~$23,370) in cash for the first prize. Incidentally, he missed the FT by one spot at the first AJPC Incheon 2018 edition held in May (this was the third edition) but wasn’t missing anything this time around. Adding to his achievements in the series, Kobayashi also cashed in the KRW 3,300,000 HighRoller Event, finishing in 5th place.

As for China’s Xing Biao Zhu, he has been making deep runs across Asia in recent times and this series was brilliant for him, winning the following titles:

For more poker updates from around Asia and the rest of the world, keep reading GutshotMagazine.com.