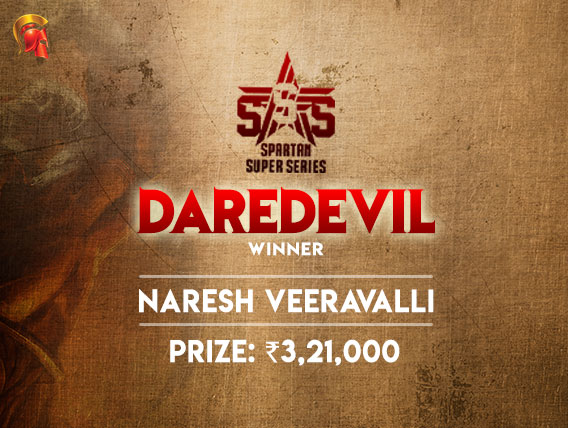 
The weekend was off to a good start with Day 6 of the Spartan Super Series (SSS) finally in the bag. A total of 5 tournaments took place yesterday which was headlined by the DareDevil as the evening’s feature tournament. 135 entries took part in this tournament and the last player standing was ‘GTOExploited’ who took away the biggest share of the prizepool.

This INR 5,500 Rebuy event started at 7:30pm and the 135 entries mentioned earlier put together a total prizepool of INR 13,37,500 well past the 10 Lakh guarantee in place for this tourney. 20 of the top finishers eventually made the money with min-cash being INR 17,922. There were some familiar faces in the field including Aditya ‘SuperuSer’ Sushant who is India’s first WSOP gold bracelet winner. Sushant though just missed out on making the final table of this event finishing in 11th place for INR 26,750. Another known name was Kartik ‘TheInternetKid’ Ved who in fact won the Elite tournament just the previous evening and he was looking to make it two for two on Saturday night when he made the final table.

It came down to Ved and his opponent GTOExploited in headsup battle for the title. With ‘Bounceez’ getting railed in 3rd place courtesy TheInternetKid, the latter covered up his chip deficit versus GTOExploited with that elimination. Headsup between both players started with near even stacks; TheInternetKid holding a stack of 1.38 million as compared to the 1.61 million of GTOExploited. The momentum shifted GTOExploited’s (Jc Td) way when he won a pot of over a million flopping a pair of Jacks on a board of 3s 4h Jh 5d 9h against TheInternetKid’s (5c Kh) rivered Fives. That pot gave GTOExploited about a 2:1 lead over his opponent and he did not look back after that. The final hand of the tournament was GTOExploited (6h 8c) vs. TheInternetKid’s Tc Jh. A preflop raise by GTOExploited to 45,000 saw a call from TheInternetKid with the blinds at 15,000/30,000 ante 3,000. Hitting his top pair on a flop of 8h 9c 5h, GTOExploited fired out once again. With a straight draw in hand, TheInternetKid repopped it which got flatted to see the turn 2s. Another bullet fired by the Kid this time of 300k which was again flatted. 2c on the river had the latter putting all his chips in on a bluff but his opponent unfortunately for him was going nowhere. GTOExploited made the call for the title and the first place prize of INR 3,21,000 while TheInternetKid who has had a very profitable weekend settled for INR 2,18,012 for runner-up.


And that was it for Day 6 at the Spartan Super Series at TheSpartanPoker.com. We will bring you the final day’s roundup right tomorrow same time at GutshotMagazine.com so stay tuned!