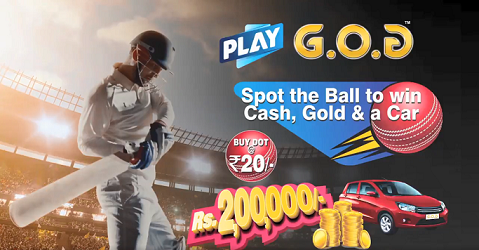 Over the last year or so, Indian businessman Raj Kundra and his wife Shilpa Shetty have made headlines on countless occasions. After ending his association with the Indian Premier League, the duo’s Viaan Industries created the Match Indian Poker League (MIPL), which has completed two successful seasons already.

Now, Viaan is in the news again, with the launch of a real money gaming app, called ‘Game of Dot’. The game follows the ‘spot the ball’ concept where users have to spot the position of the ball in the picture of a batsman playing cricket. The company has claimed the game to be legal since it uses skill, analysis and logic to know the real placement of the cricket ball.

Kundra took to his Instagram account to announce the launch of G.O.D, after the IPL 2018 final, which was won by Chennai Super Kings. He said, “A new game launched from our gaming company Viaan Industries called G.O.D. Super fun to play and you can win Lakhs.”

The game allows users to buy various packages of 1, 5, 11 or 28 ‘dots’ from INR 20 onwards, luring users with claims of assured prizes such as INR 2 lakh in cash, gold and even a car. They have mentioned that winners will be announced every Monday, so it’ll be interesting to see who becomes the first to win big from Kundra’s latest venture. To begin playing, head over to www.gameofdot.com right away!

For similar reports of real money gaming in India and around the world, keep reading GutshotMagazine.com!