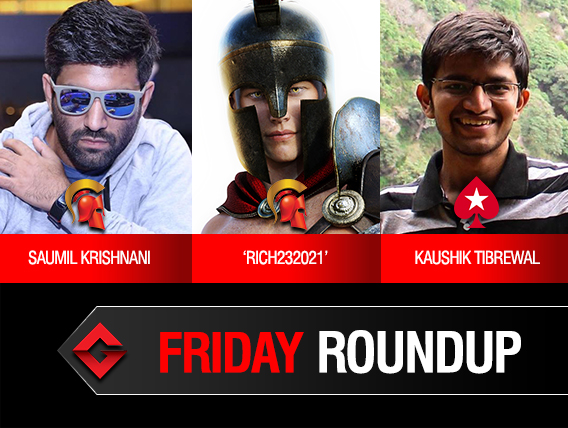 
While most of the poker fanatics are playing India Poker Championship (IPC) in Goa yet Friday night recorded substantial number of entries in the virtual felts. As the weekend is here, the higher guarantee tournaments are all showering incredible prize money to their deserving players. So, let’s take a quick look at the online tournaments of last night…

Spartan Poker hosts two high-value tournaments each Friday night. The first one that displays INR 8 Lakhs GTD is TGIF which enrolled 497 runners for a buy-in of INR 1,650, out of which only 47 profited from the prize pool. The 7+ hours grind ended at 3:16 am and at this point in time Saumil Krishnani aka ‘Indianavatar’ emerged as titleholder after the tournament halted with a 3-way deal. Following the official winner was Vaibhav Agrawal aka ‘petbot’ and in the third position rested ‘Seiborg09’.

Other notable players in the competition to cash out include Kunal Sharma aka ‘cvc’ (10th), Sathish Ananth aka ‘Jaqkten’ (13th), Raghav Bansal aka ‘thatssosick’ (21st), Avadh Shah aka ‘cateyes’ (22nd), Himanshu Dwivedi aka ‘Chanky’ (31st), Naren Purohit aka ‘IMUNAGI’ (36th), Arjanveer Chadha aka ‘bazzingaa’ (42nd and so on.

Just as the name suggests, Spartan Poker’s second tournament, The Elite features INR 18 Lakhs GTD attracting the poker players who have a strong bankroll. After chipping in a buy-in of INR 11,000, a total of 134 hopefuls took their seats. Before the tournament halted the top 17 players ended in the money, strolling out along with their hand earned min-cash. But the ultimate player to capture the title was an anonymous grinder ‘rich232021’ who beat Lakshpal Singh aka ‘LuckyBhai$’ in heads-up.

The tournament finally reached heads-up and it was level 41 when the entire competition came to a standstill. ‘rich232021’ accumulated 1.93 million chips up against Singh with 520k chips.

Singh raised 505k and put his entire stack in the middle and got a call from ‘rich232021’. The board quickly opened 7h Td 6d Ah 3s and ‘rich232021’ with a higher single pair of Seven railed out Singh holding pocket Fours in the runner-up position to bag the title.

Kunal Vohra aka ‘kvohra’ (3rd), Arsh Grover aka ‘BigggTymeR’ (6th), Arjanveer Chadha aka ‘bazzingaa’ (10th), Sahil Mahboobani aka ‘HomelessOnWifi’ (13th), Ranjan Nayak aka ‘joey114114’ (16th) were among the few notable players to finish in the money.

Friday night in PokerBaazi was reserved for FRIYAY INR 6 Lakhs GTD luring 147 entries for a buy-in of INR 4,400. Eventually, the top 18 places collected the min-cash along with their bounties, which means additional cash prizes! Outlasting this field and claiming the first-place prize money was ‘Raodyboy’ who added INR 1.54 Lakh prize money after eliminating ‘akhil0488’ in heads-up. The runner-up ultimately managed to secure INR 1.08 Lakh.

Dominating a field of 132 players was online crusher Kaushik Tibrewal who took down last night’s Uppercut Progressive KO in PokerStars. Tibrewal who plays under the username ‘breadbutterjam’ defeated ‘Pokeriyaa’ in heads-up to strengthen his poker bankroll by adding INR 1.10 Lakh while the runner-up walked out with INR 81,646.

The top 23 places received a paycheck including Arjanveer Chadha aka ‘ballistik310’ (4th), Dhinesh Kumar aka ‘you3betl4bet’ (5th), Sandeep Varma aka ‘effuno007’ (14th) and others. For similar updates from the online poker world, stay tuned to GutshotMagazine.com.