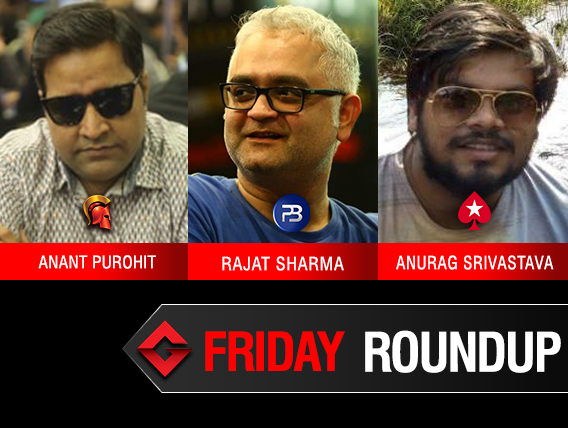 Friday Roundup: Anurag Srivastava gets yet another title


When he started the month of February, Anurag Srivastava wouldn’t have really imagined winning the biggest online poker tournament in India, accompanied with a few other titles too. He won yet another online tournament last night, shipping one on PokerStars India. Plenty of other action also took place on the virtual felts last night and you can find all that information here, so keep reading…

This is one of the most popular weekly tournaments in India, played every Friday on Spartan Poker. With a buy-in of INR 11,000, it has a massive guarantee attached to it and last night, a total field of 306 entries registered and crushed that guarantee, generating INR 30+ Lakh in the prize pool. It’s always a massive honour to take down this title and last night, it went to ‘Durrrlethodabhagwanse’ who bagged the top prize out of the 31 spots being paid out. In second place was Lakshpal Singh aka ‘LuckyBhai$’ while Abhishek Goindi finished in third place.

The second featured tournament on Spartan Poker on Fridays is TGIF and it has a lower buy-in of INR 1,650. A bigger field of 687 entries was witnessed and from them, the top 55 places were paid, from which Anant Purohit aka ‘Pro’ took down the title. He’s always crushing in online poker and it wasn’t the first time he’s won TGIF either, this time ending it after a heads-up deal with ‘Ro$a’. Pranav Bang ended in 3rd place while Goonjan Mall ended 4th, with plenty of other known names among those being paid.

This has been a regular fixture on PokerBaazi every weekend and last night, the guarantee was passed with 213 entries joining, each paying INR 4,400 to enter. The guarantee was passed, and the new prize pool of INR 6.39 Lakh was shared among the top 27 places with INR 5,303 as the min-cash. Much like on Spartan, there were plenty of known names in the money here too, but eventually, it was Rajat Sharma aka ‘LungFakeer’ who shipped FRIYAY, adding INR 1,50,356 to his poker bankroll after beating Srihari Bang aka ‘bangbang999’ in heads-up, the latter also winning a 6-figure score. This ended a 6-hour grind earlier this morning!

Just a few days back, Anurag Srivastava became India’s biggest online poker winner by shipping the IOPC Millionaire Main Event. That same night, he won another title while he followed it up with yet another one a couple of nights back. Clearly, he’s on a heater right now as he bagged another title on PokerStars India last night. He played the 6-Max Uppercut tournament with had a buy-in of INR 4,400. With 250 entries joining, the guarantee was slightly missed, but there were still plenty of prizes up for grabs. Srivastava waded through the field and won INR 1.76 Lakh including bounties for this effort. He beat Kartik Ved aka ‘TheInternetKid’ in heads-up.