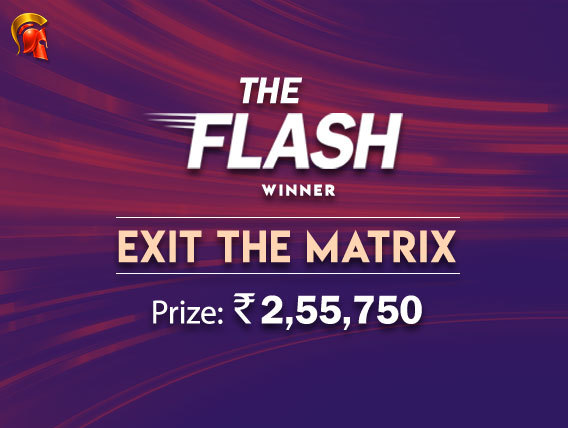 ‘Exit the Matrix’ wins The Flash on Spartan


The Spartan Poker hosts daily online featured tournaments where players from all around the country get a chance to enter into tournaments with varying buy-ins and prize pools. Yesterday, an INR 11 lakh GTD tournament called ‘The Flash’ was hosted, as it is every Thursday at 7:30 pm IST.

The INR 4,400 buy-in tournament attracted 266 entries yesterday, inclusive of 118 unique players, 39 re-entries and 109 re-buys. It was a quick tournament that ended in less than 5 hours, and ‘Exit the Matrix’ outlasted all those entries, shipping the tournament and winning INR 2,55,750 for first place.

Gutshot reached out to the winner to ask him about this big online victory. “I play on a number of Indian sites, but The Spartan Poker is truly where the biggest prize pools and highest volume of players show up. The final table was relatively easy to traverse as I entered with the chip lead and was able to apply a fair amount of ICM pressure on the other players,” he said, while wishing to stay anonymous.

“With many top Indian players at the WSOP, the field was a lot softer than usual and I was able to capitalize on that. Where Spartan stand out from other sites is the high value they continuously offer us players. They have an incredible July leaderboard which awards INR 5 lakh to the winner and money to the top 10 finishers. My intention is to go for that top spot this month. I really appreciate incentives like this and that’s what motivates me to play most of my volume on this site. Online poker in India is gaining tons of traction and Spartan is leading the pack now. However, I would love for them to do an overhaul of their software offering an updated UI, more table themes and custom bet sliders,” said Exit the Matrix.

Tonight, The Elite, and INR 15 lakh GTD tournament will be hosted on The Spartan Poker. Keep reading GutshotMagazine.com for an update on such online poker tournaments from India and around the world.