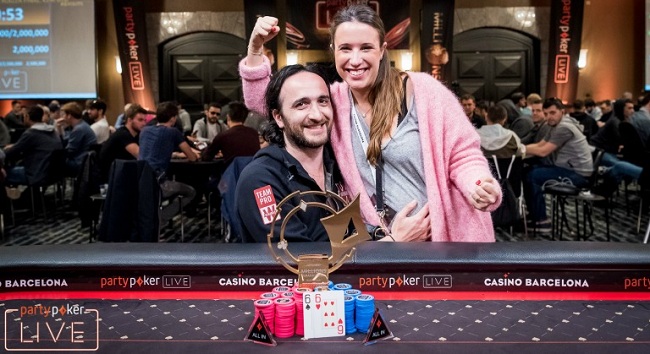 
The partypoker Live MILLIONS Grand Final kicked off at Casino Barcelona on 7th April and will continue till 15th April 2018. This tournament series would mark the end of the inaugural partypoker LIVE season, only for Season 2 to begin later this month! A whopping €10 million in guarantees were promised for this big event, and so far, players haven’t been disappointed.

Davidi Kitai, who tops Belgium’s all-time live poker money list, shipped this SHR event for €700,000. This massive win became his second highest live poker cash, after once winning €712,000 for first place at an EPT Berlin Main Event. Several top poker pros from around the world finished in the money and Adrian Mateos cashed for 4th place, just like he did yesterday in the first €25k SHR.

Kitai has over $9 million in lifetime earnings and is also a three-time WSOP bracelet winner. He’s made a few comebacks in the past and he recorded another amazing one here, winning the title after initially conceding a 1:7 chip deficit. He doubled up a couple of times before his pocket sixes beat heads up competitor Juan Domínguez’s J-Q, giving Kitai the title!

“Every time I was all in, I kept thinking about the baby and rubbed the belly,” said Kitai, talking about his pregnant wife, who was there to motivate him on the rail. This was a special victory for Kitai as he had never won an HR title with such a high buy-in in his 12-year career.

The players dived straight into the €50k buy-in Super High Roller after this tournament, and we at GutshotMagazine.com will be bringing to you an update from that tournament as well. Stay tuned!