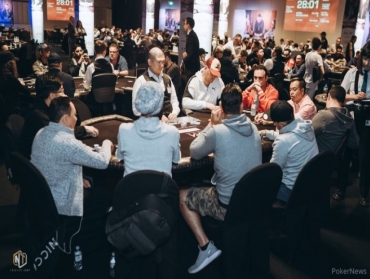 
Another busy day at the Crown Resorts Melbourne, Australia observing Flight 3 of the seven-day long Opening Event, comprising of five starting flights in total. The 2020 edition of Aussie Millions Poker Championship lines up 23 tournaments altogether and the first event itself lured numerous prominent faces in the industry.

The Opening Event Flight 3 enticed another set of 307 entries, a bigger number than the previous two starting flights. But eventually, the competition crumbled down to only 40 accomplishing their way to advance to Day 2. However, the player to amass the largest stack was David Tang accumulating 277,300 chips. Closely following the leader is Australia’s Gautam Dhingra (picture below) bagging 170,900 chips and in the third-place rests Vikrani Gupia with 161,700 chips.

Other well-known players through to Day 2 include Corentin Ropert with 78,800 chips, Indian-origin Nipun Java amassing 55,700 chips, and Gyeong Byeong Lee with 32,800. However, Tang is in the overall chip lead so far with three of the five Opening Event starting flights complete. Keep reading GutshotMagazine.com for more such international tournaments n and for general poker news from around the world.