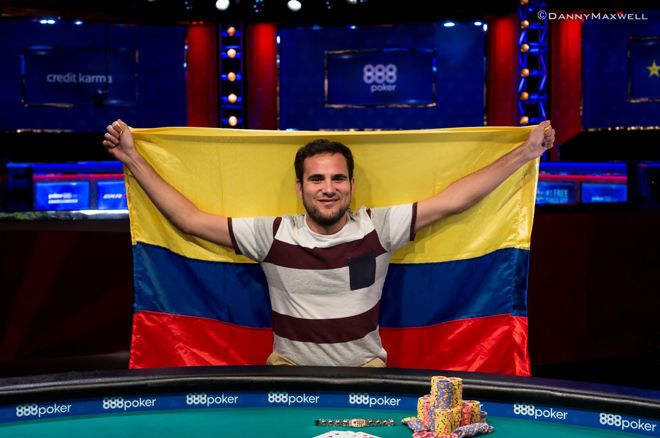 
Three years ago, Colombian poker player Daniel Ospina made his country proud by flying down to Las Vegas for the 2015 World Series of Poker and finishing second in the $1,500 2-7 Draw Lowball Event, taking home a prize of $50,260.

This year, he decided to better his performance in the same event, beating 260 entries to win the Lowball Event, for a prize of $87,678, winning his first ever WSOP gold bracelet and taking his career live poker winnings close to the $700k mark. This wasn’t just Ospina’s first bracelet win at the World Series, but it also turned out to be the first ever bracelet for the country of Colombia as well, which prompted him to proudly lift up his country’s flag after beating Timothy McDermott in heads up.

He came into Day 3 of the event with a massive chip lead and did well to play the advantage and go on to ship the tournament. “I just really felt like it was my time, I never really doubted myself and felt like everything was coming full circle,” said Ospina after winning the tournament.

“I’ve actually been taking some time off poker in the past couple of years. There was a point where I wasn’t really sure if I was going to go back to it or not. But to win today after my second place a few years ago just means the world to me,” he said, showing that giving up may not always be the right decision.

GutshotMagazine.com is following the 2018 World Series, so stay tuned for daily updates.