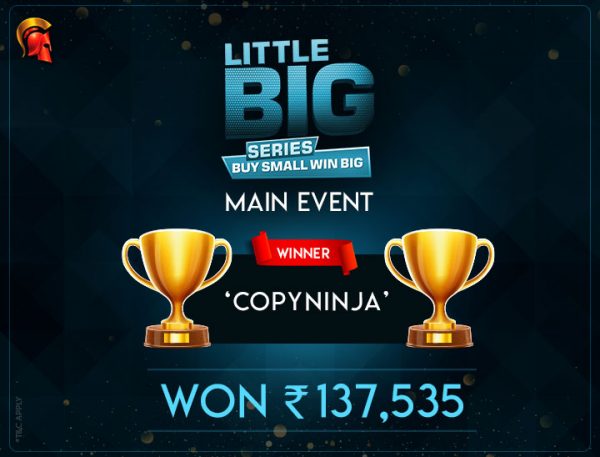 
It’s been a terrific January for the poker players in the country with high-value guarantees across all the tournaments and other promotions held at TheSpartanPoker.com. This month saw so many players claiming various titles and building their bankroll significantly. Starting with the Millionaire tournament which was claimed by Amit ‘BigLittleTilt’ Ajwani for INR 24,50,000. The next big thing was India Online Poker Championship (IOPC) which guaranteed INR 6.8+ CR in overall prizepools and last but not the least this past week we had the Little Big Series (LBS), a favourite with the small ball grinders and offering a guarantee of INR 22 Lakhs in prizes.

The LBS series comprised a total of 18 events with some high-value tournaments which included the Mini Biggie with 600K GTD, Warm-Up with 200K GTD and of course the LBS Main Event with 500K GTD. Along with these tournaments, there was an LBS leaderboard too offering some cool cash and kind prizes. The four day long series concluded last night with the 18th event i.e. the 100K GTD which was a Progressive Knockout tournament.

Coming back to the Main Event which guaranteed INR 5,00,000, 519 entries took part in this INR 1,100 tournament. These entries surpassed the guaranteed prize pool to settle at INR 5,19,000 which was distributed to top 40 places with a min-cash of INR 3,114. Coming on top it was ‘CopyNinja’ who claimed the Main Event title for INR 137,535. ‘CopyNinja’ defeated ‘Bhee’ in the heads-up battle where ‘Bhee’ collected INR 85,635 for a second-place finish.

Other than the Main Event winner, the other player of note or should we say Series was Ayush Khandelwal. Playing under the moniker ‘Giz^zy’, Khandelwal secured top place on the LBS leaderboard with his consistent finishes in 9 of the LBS tournaments. This included one title in the midway stage when Khandelwal shipped LBS #9 (75K GTD) (R+A). For his fantastic showing, he was rewarded with INR 50,000 in cash prizes plus a ticket each to February’s Millionaire and 2.o.K (Two of a Kind) tournaments.

While the LBS comes to an end, tournament enthusiasts at The Spartan Poker can look forward to the Spartan Super Series which is coming up from 12-18 February. In the meantime, stay tuned for the interview of the LBS Main Event winner and also the leaderboard winner right here at GutshotMagazine.com.

Here are the leaderboard toppers: 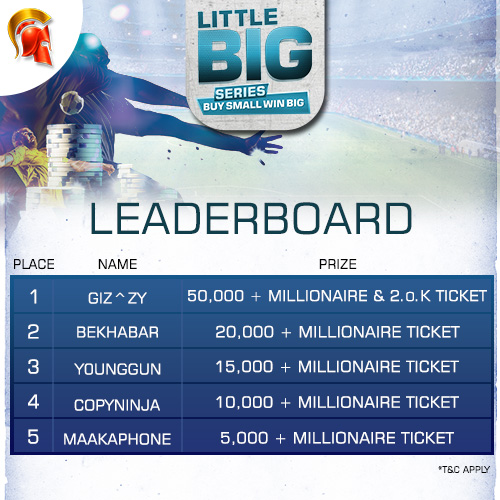