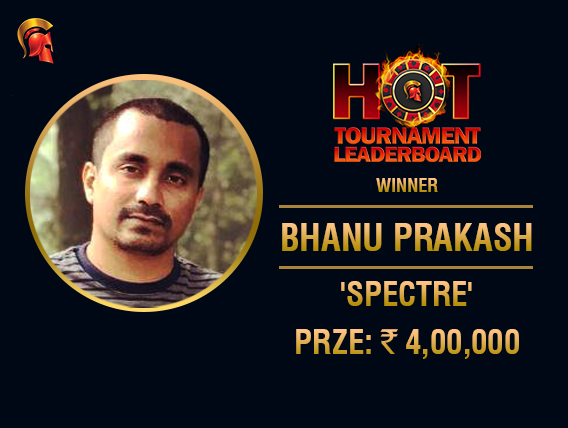 
Halloween was celebrated around the world last night and that indicates the end of the month of October. There’s always a lot in store when a new month begins, but we’re here to report winners of promotions held by The Spartan Poker during the month gone by – The Hot Tournament Leaderboard and Cool Leaderboard Challenge.

We earlier reported Rajesh Kumar Shukla winning the Cool Leaderboard for INR 1.2 lakh. To qualify for that promotion, players had to participate in the lite or mini versions of Spartan featured tournaments, but the real challenge is definitely the Hot Tournament Leaderboard and hence, the prizes at stake are bigger here.

To be eligible, players must participate in Spartan featured tournaments during the qualifying period of 1-31st October 2018 and the top 10 leaderboard finishers at the end of the month would share the prize of INR 10 lakh. The month has ended and the winner at the end of this promotion turned out to be none other than Bhanu Prakash aka ‘spectre’.

Prakash is a well-known player and he’s always a top contender when it comes to Spartan featured tournaments. He has tons of victories on Spartan and is a player who has accomplished everything including an IOPC title, winning the SSS Main Event, and also winning the Cool Leaderboard Challenge a couple of months back.

Here, he showed consistency throughout the month and his biggest win came when he chopped the Mega Freeze with Avadh Shah just a couple of weeks back. He beat a field of 126 entries in that tournament and that’s what earned him the most points towards this leaderboard.

He was awarded an additional INR 4 lakh prize for winning the leaderboard. ‘Exhaust’ came in second place and won INR 2 lakh, having won two featured tournaments during the month, including Destiny and Daredevil. Gutshot spoke to Prakash after this victory and he said, “I had decided at the start of the month to chase the leaderboard, so I kept pushing at it. Towards the end, it got so close that even a single min-cash could have made a difference. Happy I won.”