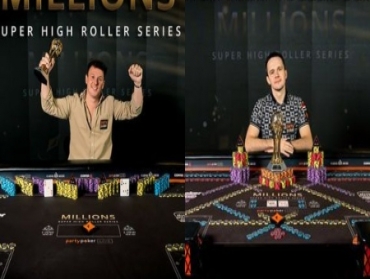 
Between 6 to 14 March, the partypoker LIVE Millions Super High Roller Series (SHRS) Sochi has crowned four of its five champions. The competition also recorded a couple of members of the Team partypoker stable. It was a rare traveler to live tournaments circuit, Sam Trickett picked up $435,000 in prize money after triumphing Event 1: $25,000 Short Deck. And Mikita Badziakouski turned the final table chip lead to $765,000 payday!

Event 1 $25,000 Short Deck pulled out 58 runners that whittled down to just nine over the course of action. It was Aleksey Gortikov bubbling the money and Malaysia’s Webster Lim becoming the bubble boy of the final table. Chin Wei Lim and Paul Phua were the first casualties of the day. The legendary Phil Ivey soon followed the door after his pocket queens couldn’t overtake Matthias Eibinger and settled in the 7th position. Russia’s Artur Martirosyan crashed out in 6th place. The recent Super High Roller Bowl, Australia winner Timothy Adams busted in the fifth place before Adrian Mateos. It was Eibinger whose elimination gave way to heads-up play.

Trickett was ahead with 4.2 million to 3 million of Ivan Leow when the final hand took place. Leow held Ace-Queen but Trickett’s Four flush him on the river as the four of spades made five to end the tournament and boosted his $21 million total live earning by adding hefty $435,000 in prize money!

After the elimination of Luc Greenwood in the 3rd position who gave way to heads-up between Badziakouski and Martirosyan. The latter shoved with trip sixes and was called by the former who held a flush draw and gutshot combo and Badziakouski triumphed after hitting the flush on the river, wrapping up the tournament in a spectacular way with $765,000 in prize money.