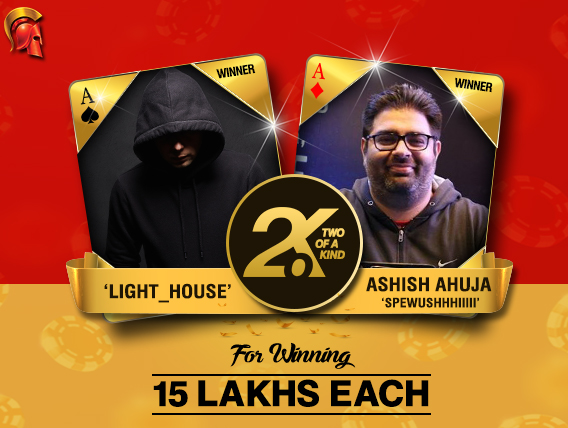 
The above are characteristics of a very unique online poker tournament offered by The Spartan Poker – Two of a Kind (2.o.K). Played once every month, it is one of Spartan’s signature tournaments which guarantees the top two players a whopping INR 15 lakh each, as play is halted when someone busts in 3rd place.

This tournament makes no distinction between first and second place and yesterday was another edition of this tournament, kicking off at 6pm and attracting a massive field of 1,056 entries. Not only was this a huge field size but it was also a very tough field, with India’s best pros taking part as eventually, the top 70 players finished in the money with a min-cash of INR 10,454.

Not many tournaments have such big prizes on offer and yesterday, a prize pool of INR 58.08 lakh was generated, with the top two receiving the biggest pay-outs. It’s every poker player’s dream to end victorious in the 2oK tournament, and yesterday’s champions were Ashish Ahuja aka ‘Spewushhhiiiii’ and ‘light_house’ with the latter wanting to stay anonymous.

While we can’t tell you much about light_house, we do know that he had more than double the chip stack of Ahuja at the time the tournament came to an end, but both players were equally rewarded with prizes of INR 15,00,000 each. The last person to hit the rail was Sahil Chutani aka ‘$lim$hady19’ who won a pretty handsome amount himself, taking away INR 6,38,880 in prize money but alas, he missed the huge pay jump.

The big prizes came into the picture and one of the known names to cash out on the Final Table were Rubin Labroo aka ‘kornkid’ who ended a good run in 7th place for INR 1.10 lakh, bringing up the first 6-figure score of the tournament. Rajat Sharma aka ‘Garammasala’ finished in 5th place for INR 2.32 lakh. Chintan Joshi aka ‘ToBluffOrNotToBluff’ finished 4th for INR 3.8 lakh. Joshi maintained a good stack for a couple of hours before he spewed everything in a matter of just a couple of hands.

However, the heroes of the night were Ahuja and ‘light_house’ who would’ve partied through the night, or in this case, through the morning, as the tournament itself came to an end at 4:20am today. A couple of bottles of champagne would’ve definitely been popped in each household, while we wouldn’t rule out a few fireworks either.

Gutshot caught up with Ahuja, who is a part of the AceJack stable and has been raking in some big profits from online poker in recent times. He said, “Even though I’ve won many tournaments before, winning 2oK is really special for me. For the first 5 minutes, I couldn’t sink in the feeling that I’ve actually won, but slowly when I realized I’ve actually won it, I was overwhelmed with great feelings as this my biggest win till date.”

Spartan often brings smiles to the faces of hundreds of players like Ahuja and light_house, with their entire line-up of high value tournaments. Now, they are also set for another edition of the Spartan Super Series, which begins on 12th December. For similar tournament roundups and reports from the SSS, keep reading GutshotMagazine.com.