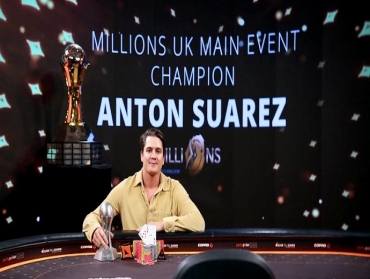 
Everyone knows that partypoker features tournaments of biggest guarantees and payouts. The tour stops crisscross the globe and include the partypoker MILLIONS flagship events. The 2020 LIVE MILLIONS UK Main Event announced its winner just a few days ago and crowned the tour’s latest millionaire Sweden’s Anton Suarez boosting his bankroll with an enormous and his career-best $1 million!

The Main Event displayed a fixed buy-in of $10,300 and Suarez outlasted a field of 530 players. Generating a higher prize pool after the advertised guarantee of $5 million was crushed by $141,000 out of which the top 76 finishers found themselves strolling out with a min-cash. Suarez beat Christian Rudolph in heads-up, inking his total live earning to a 7-digit figure of over $1.22 million.

The champion ended his year quite well after taking down EPT Prague Turbo Knockout. Suarez’s live career kick-started in 2013 when he crushed the Deep Stack Extravaganza III NLHE in Las Vegas. Post his victory in the Main Event, he expressed, “I don’t play many tournaments, so I’m super happy.” Suarez started off ME sitting in the middle of the pack after he decided to take a shot in a $500 buy-in satellite and managed to win a seat. He turned $500 into his career-best amount. His largest prior record was $103,297 after finishing 5th in the PLO Event at the EPT Barcelona in August 2019.

He jumped from the 6th position to second in chip lead with 12 players remaining. Suarez scored his first elimination by busting fellow countryman Fredrik Andersson in 5th place followed by his next victim James Clarke and eventually after new notable hands, the tournament came down to heads-up which lasted for over two hours. The chip lead kept shuffling and eventually, the event halted with the last hand. Rudolph with 7h 4h and Suarez with Ad 8h. The board ran Kc 9d 2d As 9c and the latter made aces and nines to secure the pot and the title while Rudolph headed towards the pay desk for $620,000 for finishing in the runner-up position.

The entire Main Event was lit by some of the prominent faces in the industry including Richard Trigg, Marvin Rettenmaier, Dara O’Kearney, and Joao Vieira, the 2019 WSOP Main Event champion Hossein Ensan, Faraz Jaka, Sergi Reixach, and Adrian Mateos who finished in the money.

Keep reading GutshotMagazine.com for more updates on the top poker tournaments from around the world.