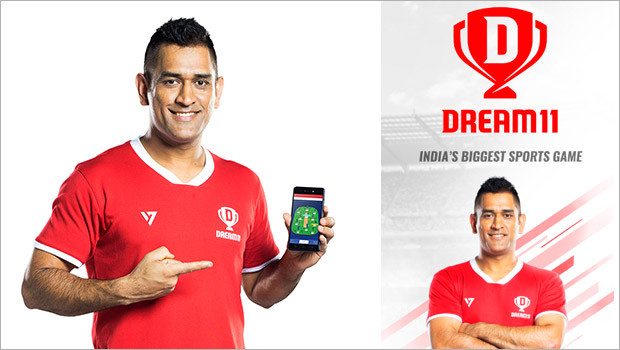 In SHORT: Fantasy sports operator Dream11 has signed Indian wicket keeper and former captain MS Dhoni as their brand ambassador. While Dhoni’s picture promoting Dream11 has been up on the website since quite a while now, the official announcement was only made yesterday.

Similarly, Dream11 is a fantasy sports platform that needs no introduction anymore. Founded in 2012 by Harsh Jain and Bhavit Sheth, the company has slowly turned into a market leader in the industry and India’s most popular fantasy sports brand. They currently have a user-base of over 2 crores.

Commenting on this latest partnership, CEO Harsh Jain said, “Dhoni’s immense popularity amongst sports fans, coupled with his leadership qualities and sharp cricketing acumen, makes him the perfect match for our brand. He embodies all the characteristics that our users need while picking their Dream11 team. We believe this association will help us exponentially grow our current user base of 2 crore Indian sports fans.”

This will certainly be the biggest move for the growing fantasy sports company Dream11, who have been progressing well over the years. Last year, they also became official fantasy sports partners for the Caribbean Premier League (cricket) and the 2017-18 season of the Indian Super League (football).

“I am delighted to associate with Dream11 – because it gives millions of sports fans an opportunity to be the decision maker, create their own team and experience the game first-hand. The Dream11 platform perfectly defines the importance of choosing the right players and building a team as per the playing conditions,” said Dhoni, confirming his partnership with Dream11.

Can it get any bigger for Dream11? MS Dhoni is legend of the game and is also known to be one of the most intelligent cricketers in international cricket. This partnership is certainly going to help Dream11 grow leaps and bounds with MSD set to undertake various marketing campaigns and brand engagement activities for them. Comment and let us know your thoughts!

For similar reports and news on such partnerships from the gaming world, keep following GutshotMagazine.com!