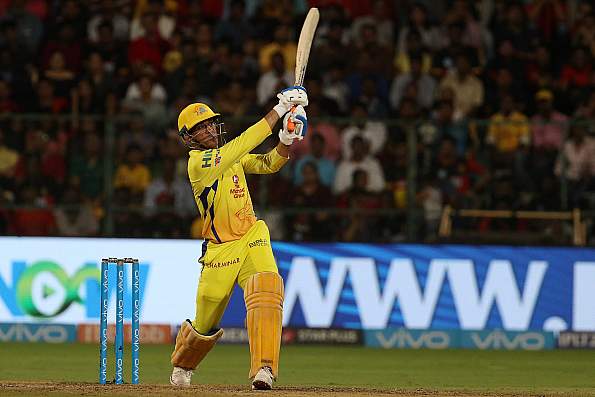 Who would you want to be at the crease when you need an insane amount of runs to be chased down in the last 7-8 overs of a match? Who remains as cool as a cucumber when everyone else falters under the scoreboard pressure? The answer to both those questions is ‘Mahendra Singh Dhoni’.

Yesterday was one match that a cricket fan would just not want to miss. It was Chennai Super Kings vs Royal Challengers Bangalore, or better still, MS Dhoni vs Virat Kohli. MSD won the toss for Chennai, elected to field first and many would’ve thought that was the wrong decision once the RCB batsmen started going berserk.

The South African pair of Quinton de Kock and AB de Villiers launched an all-out attack against the CSK bowlers, with ABD even putting one six out of the stadium – a massive 111-meter blow. The two looked like they could take the score to over 230+ last night but both fell by the 15th over and RCB were restricted to 205/8. ABD scored 68 and QdK scored 53.

A cricket expert would know that for Bangalore, 205 is not a winning score as they lack quality bowling resources. To make it worse, they dropped Chris Woakes yesterday for an added batting option in Colin de Grandhomme. However, they started well with the ball. A couple of wickets for Yuzvendra Chahal led to CSK falling to 74/4 in 9 overs.

However, Kohli may have made one mistake in finishing off his trike bowlers Chahal and Umesh Yadav by the middle overs – the only two who bowled well last night. 99 to win in 7 overs and most may have thought it was just a matter of time before Bangalore added two more points to their tally this season.

However, what followed was some wonderful hitting by an in-form Ambati Rayudu and the legendary MS Dhoni. He kept calm even as Rayudu was dismissed for 82 and even as the required rate touched 15-16 a few times. He stood tall, whacked 7 sixes in his innings of 70(34)* and took his team home in customary MSD-style, hitting a six over long on. The match saw a total of 33 sixes being hit, which is an IPL record. Also, this was CSK’s highest ever successful chase in an IPL match. Man of the Match: MS Dhoni.

Even RCB fans could do nothing on the day, apart from accepting the loss and applauding that marvellous innings from MSD. Chennai are now back at the top of the table. Keep watching GutshotMagazine.com, where we bring you all the latest cricket news and IPL match results!