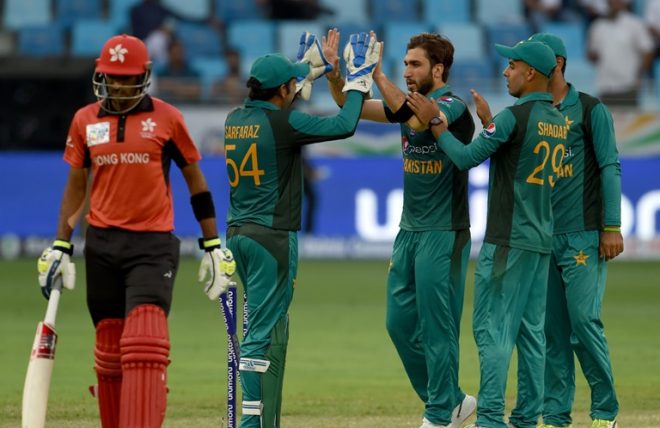 Pakistan was never in a difficult position, cruising to victory against a young Hong Kong side. Hong Kong’s batting proved quite a mismatch for Pakistan’s bowling attack. Anshuman Rath, the Hong Kong skipper, won the toss and elected to bat which would have been the ideal decision as the weather conditions would normally tire out the bowling team but Pakistan’s bowlers kept striking, preying on Hong Kong’s nerves and technical deficiency.

Usman Khan was a touch of class, bagging 3 wickets by the end of the match and giving away only 19 runs in his 7.3 over spell. He found the right bounce to make the life of the Hong Kong openers miserable. Hong Kong were 39 for 3 when Shadab Khan came out to bowl and in his very first over, he took tow wickets without giving a single run.

The double wicket maiden was the point from which Hong Kong could not recover despite the 53 run partnership for the sixth wicket by Aizaz Khan and Kinchit Shah. Hong Kong managed to score a mere total of 116 runs before getting all out in the 38th over.

Pakistan came out to bat as openers Imam-Ul-Haq, nephew of Inzamam-Ul-Haq, and Fakhar Zaman looked well settled before Zaman lost his wicket to the first ball of Ehsaan Khan, managing to score 24 of 27 deliveries. Babar Azam came out to support Haq and the duo cruised towards victory but Azam lost his wicket in the 21st over and the scorecard read 93/2. Babar Azam scored 33 of 36 balls before losing his wicket off the bowling of Ehsaan Khan.

This was the last wicket to fall as Pakistan did not give up anything else and secured victory with style as Shoaib Malik and the Pakistan team signed off the match with a boundary. Imam-Ul-Haq, who was controversially not given out on 24 after an LBW appeal by both the field umpires and the third umpire after a DRS review, went on to score a half century. Man Of The Match: Usman Khan.