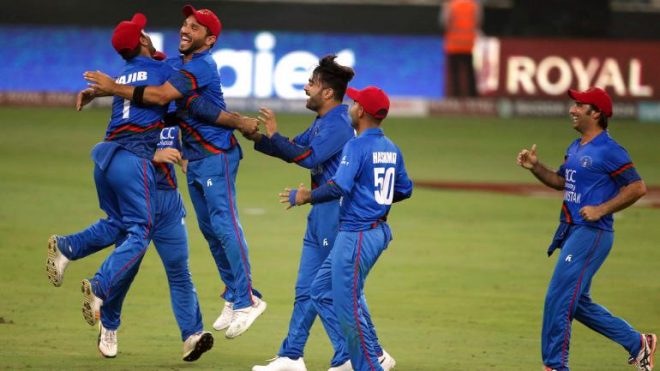 Yesterday marked one of the most thrilling games of this year’s Asia Cup when Afghanistan, from behind, tied the game against India as they made a high-spirited comeback from a point in the match where it seemed that they, after another good performance, would lose the match. Afghanistan won the toss and elected to bat first and let India do the chasing.

Openers, Mohammad Shahzad and Javed Ahmadi came out to bat and Shahzad, with a cool strategic mindset, started adding runs to the board but as one was piling on runs at one end, at the other end Ahmadi was struggling to find his momentum going and he finally was stumped by Dhoni, captain of the Indian cricket team for this match, after managing to score just 5 runs from 30 balls.

Two overs later, Rahmat Shah also lost his wicket and was sent back to the hut. Hashmatullah Shahidi came out to bat alongside Shahzad, who was still going strong and getting runs on the board by targeting the right bowler and waiting for the right ball to score runs and to his disappointment his did not get the support he needed from the other end and Shahidi also lost his wicket for a duck.

The Afghani skipper Asghar Afghan came out to bat for a very short period as Kuldeep Yadav sent him back to the hut on the very first ball after Shahidi’s wicket, putting Yadav on a hat-trick in the 16th over. At the end of that over the score card read 82/4. Despite losing wickets in quick succession, Afghanistan kept on fighting and racked up a total of 252/8 at the end of the innings, thanks to a magnificent stand out knock of 124 runs. Mohammad Nabi also contributed with a 64-run knock to help his team to an appropriate target.

Indian openers came out to bat and it seemed like there was no stopping the Indian team to emerge victorious as both K.L. Rahul and Ambati Rayadu looked well-settled on the crease. They racked up a partnership of 110 runs before Nabi got rid of Rayadu in the 18th over. Rahul followed him in the 21st over and it seemed like the spinners could get the job done and they did just that.

Both openers scored a half century and Dinesh Karthik chipped in another 44 runs for India to still be able to win it but the Afghani spinner had other things in mind. They got wickets in quick intervals and India having already wasted their review on Rahul could not do anything about the wickets or Karthik and Dhoni, as the review might have helped at least one of them to stick around and see the match through. But after losing the first two wickets the Indian middle order could not get the job done and the match ended as a tie with one ball to spare as India lost all their wickets.

Dhoni and Pandey managed only 8 runs apiece and while Jadhav and Jadeja tried to get India back on track, the too lost their wickets to the bowling prowess displayed by Afghanistan. The Indian tail end was a walk in the park for the bowlers, but they too could not get a result out of the match.

India, anyway, had qualified for the final and Afghanistan had already been eliminated after losing both their games in the Super Four stage, but the spirit shown by Afghanistan, not only yesterday but throughout the competition, was applausible as they won a lot of respect of a lot of cricket fans out there. Man of The Match: Mohammad Shahzad.