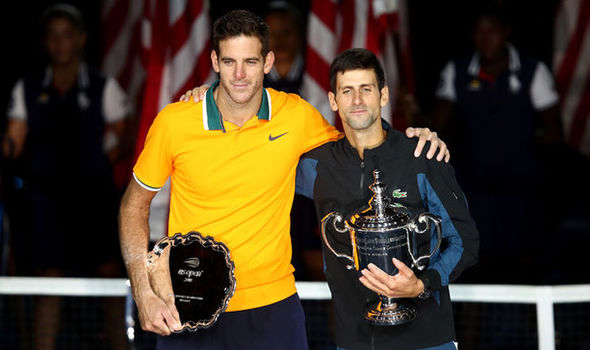 
The Men’s Singles Finals took place in the Arthur Ashe Stadium yesterday between 6th seed Serb, Novak Djokovic and the 3rd seed Argentine, Juan Martin Del Potro. The match was Djokovic’s eight final of the US open and just the second final for Del Potro, after his 2009 US Open win. Djokovic looked comfortable and determined right from the start as he beat his Argentine nemesis in straight sets, 6-3 | 7-6(4) | 6-3, to clinch his third US Open title. This win also marked the Serb’s fifteenth win over Del Potro and also his fifth win out of five matches in Grand Slam meetings.

Throughout the match, Djokovic patiently prodded Del Potro with shape and slice, repeatedly turning defense into attack with unrelenting depth and precision to keep the Argentine on his back foot for much of the 3-hour, 15-minute match. Djokovic was ready for everything that was thrown at him by Juan Martin Del Potro from the other side of the nets. It was a noisy environment in the stadium with the crowd firmly behind Del Potro under the roof in Arthur Ashe Stadium, he battled to the bitter end, leveling sets two and three after dropping an early break in both. Ultimately, the Serb was too solid.

Despite the Tandil 12 singing the “Ole Delpo” song at various occasions in the match, it hardly affected Novak who had something to say about it post match. He said, “This might sound funny, but my nickname is Nole. When they shout, ‘Ole, ole, ole, ole,’ that’s what I hear,” he said at his post-match press conference. “I actually make myself hear that, to be honest, no word of a lie. I really do… When the roof is closed, trust me, it’s very, very loud down there. It takes a lot of effort to actually stay poised in the moment. I’m glad I managed to do that.”

The first saw Djokovic steer comfortably past the Argentine, but the second set was a gruesome one. it went on for 95 minutes before it was decided in a tie breaker between the two and it was Del Potro with an early 3-1 lead after a pair of forehand winners. But Djokovic grinded his way to a 4-3 advantage, and Del Potro’s forehand let him down as he surrendered a decisive minibreak, dumping a forehand into the net off an unusually tame mid-court return. Two more forehand errors – one of them unforced, his 15th of the set – gave Djokovic the set and a vise grip on the match. The third set was just like the first with not much difficulties for the Serb and further disappointment for the Argentine.