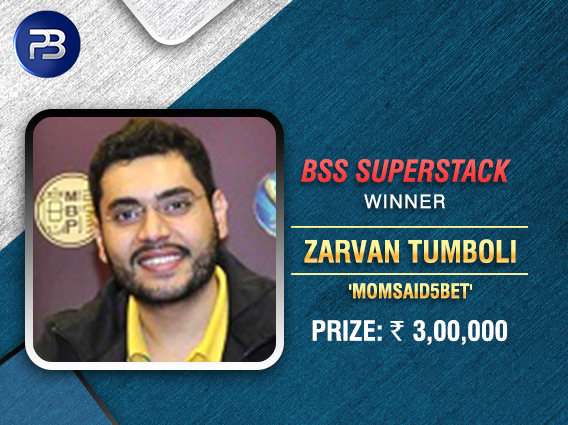 
PokerBaazi is among India’s top three biggest poker companies and they often host high-value tournaments to give their users the chance to be a part of massive prize pools. Some of these tournaments are daily, some weekly, while some are hosted less frequently.

One of their weekly promotions is the Baazi Super Sundays (BSS), where three tournaments are played every Sunday with an overall guarantee of INR 25 lakh in place. The biggest of these three is the BSS SuperStack INR 15 lakh GTD, and the latest edition of this tournament took place at 8pm on Sunday.

The tournament attracted a 295-entry field and by the time it came to an end, we were well into Monday morning. Many known players finished in the money of this tournament, but it was Zarvan Tumboli who ended victorious, playing under the username ‘MomSaid5Bet’.

It was a welcome victory for Tumboli right before the start of the WPT India series in Goa. He is a well-known player in the Indian poker industry, with consistent victories in live as well as online poker tournaments, while also being a part of other poker initiatives like the Poker Sports League.

Tumboli is also a MadOverPoker (MOP) sponsored pro and he would’ve been delighted with the INR 3 lakh top prize that he was awarded. Tumboli is always a top contender when it comes to online and live poke tournaments, so this win will come as a massive confidence boost. Do you think he’ll be able to carry the form to Goa and win at the WPT as well?

Remember, Tumboli has live cashes in different places around the world, including Macau, Netherlands, Manila, Vietnam, and others. His most recent victory came in Vietnam where he took away his first WPT title and VND 246,950,000 in cash for winning the prestigious Ho Chi Minh Cup.