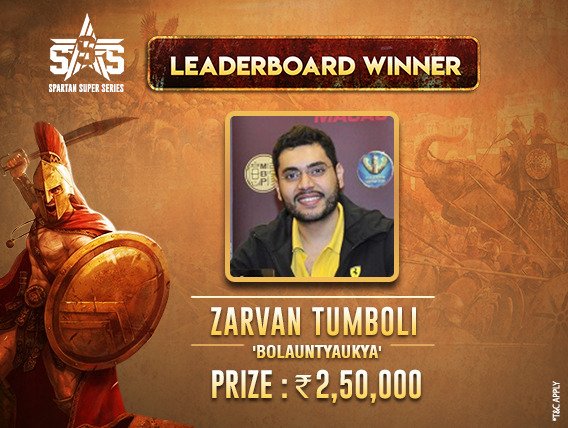 
He said he’s looking to do it, and indeed he did. We’re talking about Zarvan Tumboli who plays online as ‘BolAuntyAuKya’ on Spartan Poker. After winning SSS Event #1, he spoke to Gutshot about how he intends to chase the SSS Leaderboard, and four days later, he stands victorious, ending #1 on the SSS Leaderboard.

A total of INR 5 Lakh was kept side as Leaderboard prizes, including INR 2,50,000 which would go away to the winner. In this case, it was Tumboli who finished at the top, and pretty easily, might we add. At the end of it all, there was a considerable point different between Tumboli at 3,159 points and the second-placed ‘JasonBourne’ at 2,922 points.

The 5-day series is over and Tumboli was undoubtedly one of the best in the series, for which he has been rewarded handsomely. Apart from winning the opening tournament of the series, he also won the SSS Daredevil title a couple of nights, beating Shravan Chhabria in heads-up.

While there was some tough competition, the series panned out just how Tumboli would’ve wanted it to, taking away a number of cashes, a couple of titles, and of course, bragging rights for ending as the player of the series. Finishing second was ‘JasonBourne’ who wins INR 1,00,000 in additional prize money while Rajesh Kumar Shukla aka ‘Narammasala’ finished 3rd.

Shukla is one person who needs no introduction, a person who loves the idea of playing in the SSS. He has not won the leaderboard once, but twice in the past, narrowly missing out on a third victory. Here, he was awarded INR 75,000 for his finish, ‘EasyMoneySniper77’ finished 4th for INR 50,000 and Varun Gupta aka ‘VG92’ finished 5th for INR 25,000. Some others who did well but didn’t earn a cash prize on the leaderboard include Monish Kumar (6th) and Sunday SuperStack winner Inudprakash Mishra (8th).

For more updates on the biggest and best poker tournaments from across the world, keep reading GutshotMagazine.com.