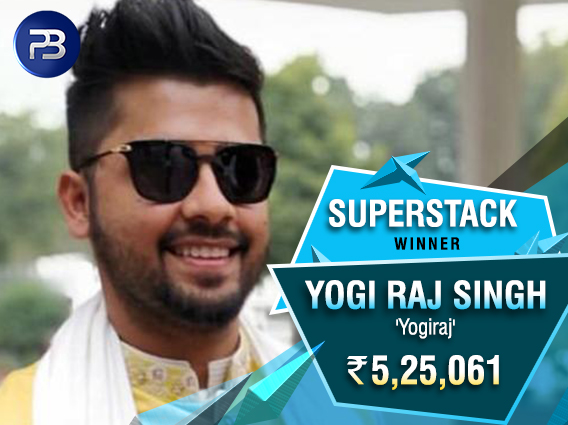 
Yesterday was a Sunday and hence it saw a horde of tournaments that had comparatively staggering guarantees. Among those tournaments was PokerBaazi BSS SuperStack INR 25 Lakhs that attracted a massive field and even crushed the guarantee by a large margin.

Last night’s BSS SuperStack started at 7 pm sharp on PokerBaazi and went into the books at 3.22 am today morning. A total of 353 entries (including 244 re-entries) were attracted to the tournament for a buy-in of INR 5,500. The resulting prize pool amounted to a colossal INR 29,85,000.

The player to emerge victorious in the tournament and earn the awesome first-place cash prize of INR 5,25,061 was Yogi Raj Singh aka ‘Yogiraj’. He beat ‘RamSlam’ in heads-up to secure his title and cash prize. RamSlam too got a good amount of INR 3,65,961 as second-place cash prize.

We contacted the winner Singh and he was excited to speak to us. Singh is a Chartered Accountant by profession, currently aspirinig to become a civil services officer and had reached the notoriously tough interview stage twice. He was introduced to poker 5 years ago at a live table in Delhi where he met a PokerBaazi user ‘vinay09’ who introduced him to the online scene. He focuses on PLO cash games and has played tournaments using the reward points he makes on cash games or the deposit codes.

Singh elaborated on his win yesterday saying, “I finished 2nd in November last year which was my best score in terms of pay-outs. Since then I tried playing at least 2 BSS tournaments a month using only deposit codes or reward points for the ticket. Have had many cashes since then but never could manage to convert it into a big score, but not giving up and patiently waiting for a good day paid off.”

He then talked about the platform itself saying, “Playing on PokerBaazi feels at home and the main reason for me being loyal to the website is the customer care experience. If there is an issue and if someone from PokerBaazi isn’t available, you always have Navkiran Singh, CEO of PokerBaazi, available on Facebook or WhatsApp to help. Every player (big or small) is heard on PokerBaazi and given equal importance. I basically won this tournament with zero investment, so the reward points and the deposit codes are of big help and I hope many more players make use of tickets and points to score big.”

Keep reading GutshotMagazine.com for more such tournament updates, roundups and for general poker news from around the world.