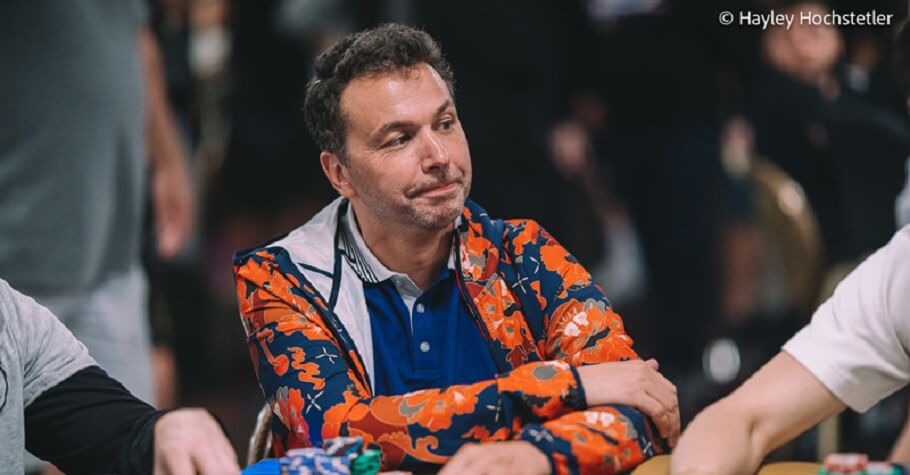 
After multiple starting flights, a couple of Day 2 flights, and a few more days of intense grinding, we’re down to the final 35 players in the World Series of Poker (WSOP) Main Event. The tournament began with 8,663 entries and now only a handful are left, so the speculations have begun on who could be the WSOP 2022 Main Event champion.

We’ve spoken about a few players who headlined the last couple of days and one of them was USA’s Zilong Zhang who was on feature tables and everyone was in awe of how he took on some top pros around him. He was unfortunately eliminated early on Day 6 and another person in the limelight was the last woman standing in the event, Efthymia Litsou.

PokerStars ambassador Alejandro Lococo was yet another person who was turning heads at the Main Event, making his second successive deep run in this tournament, finishing 7th in the WSOP 2021 Main Event as well. One hand in particular that got him in the limelight was a massive bluff against Karim Rebei, and while Lococo is out now, Rebei is still going strong in the tournament.

Rebei is among the top five stacks going into Day 7 of the WSOP 2022 Main Event, recovering very well from that big blow to his stack against Lococo’s bluff, which also became Maria Ho’s favourite hand of the tournament. But like most of the others going into the seventh day of this mega poker event, he’s not very experienced or known on the global stage, and that’s why we’re here to give you some more information on Karim Rebei.

He was among the top fifteen stacks at the end of Day 5 as well, with a stack of 8.1 million chips. From there, he went on to nearly quadruple his chips on Day 6, ending with a towering stack of 31.4 million, slightly behind the Day 6 chip leader Jeffrey Farnes. And if you look at his Hendon Mob profile and his past live tournament cashes, you’ll see that there’s not much of experience here at all.

His total career live tournament cashes are just at $285,285 as per his Hendon Mob profile which includes a career-best $126,259 which he was paid for finishing 6th in a DeepStack Championship Poker Series in Las Vegas in 2018. The Algerian poker player has tournament cashes across the world in Prague, Marrakech, Rozvadov, Vegas, Paris, London, Barcelona, and other places. But he’s never been deep in such a massive tournament before.

Sometime during Day 6 today though, he was considerably short and he probably wouldn’t have been looking forward to making Day 7 at that point of time. However, he got super lucky to win a runner-runner hand against Tzur Levy to scoop up a pot of 12 million chips and get back into the game once again. Here’s a look at the hand that got him back in the running: 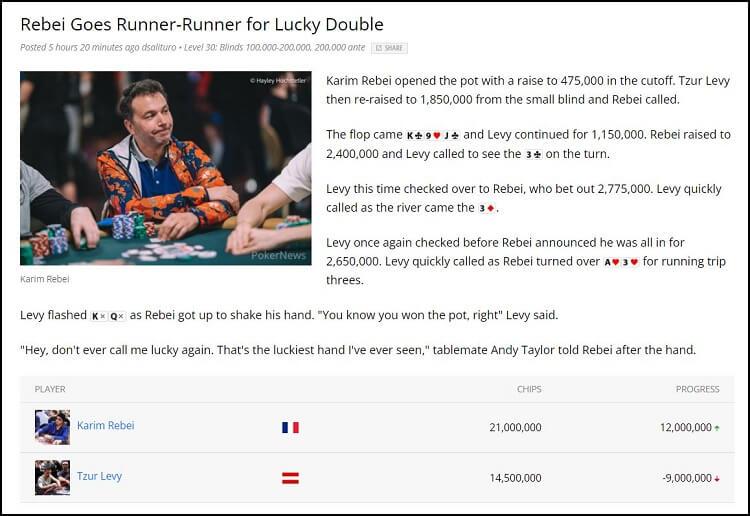 “I hope my playing style is disturbing for the other players. What a lot of players have forgotten, there are 52 cards in the deck. If we want to play short deck, we play for short deck. I play 52 cards,” said Rebei after Day 6 about his game style, which includes playing a high percentage of hands as compared to most others in the competition.

When the WSOP 2022 Main Event resumes on Day 7 tomorrow, Rebei begins with a big advantage because of his chip lead over most of the others. Either way, the lowest payout of the day for 35th place is also at $262,300, which is almost equal to his entire career earnings till date. We’re sure he’s elated with his run so far, and getting further into Day 8 and Day 9 will also be on his mind! Here’s Jeff Platt interviewing him during Day 5 of the Main Event:

One of the biggest stacks in the room, Karim Rebei: pic.twitter.com/YLxOpwc9Ka

The tournament is going to get a little bit more serious now, as do the pay jumps. So, we’re wondering if Rebei goes on to play a majority of hands like he’s done so far, or does he try to alter his game to match the situation?! We believe that he shouldn’t change anything, now that he’s reached so far. What’s worked till here could very easily work for the next few days as well.

Unrelated but a good joke on Karim Rebei

@WSOP @PokerNews A guy named Rebei has the biggest stack at the #WSOPMainevent ?

Priceless. Hope he wins. Or goes broke and tries to, ya know, rebuy.

Will he lose his way and get eliminated on Day 7 or will the poker Gods stay with him for another day? If you’ve been following the WSOP 2022 Main Event and have read a little bit about him, comment and let us know what you think. And for more updates on the rest of this major world tournament, stay tuned to GutshotMagazine.com… 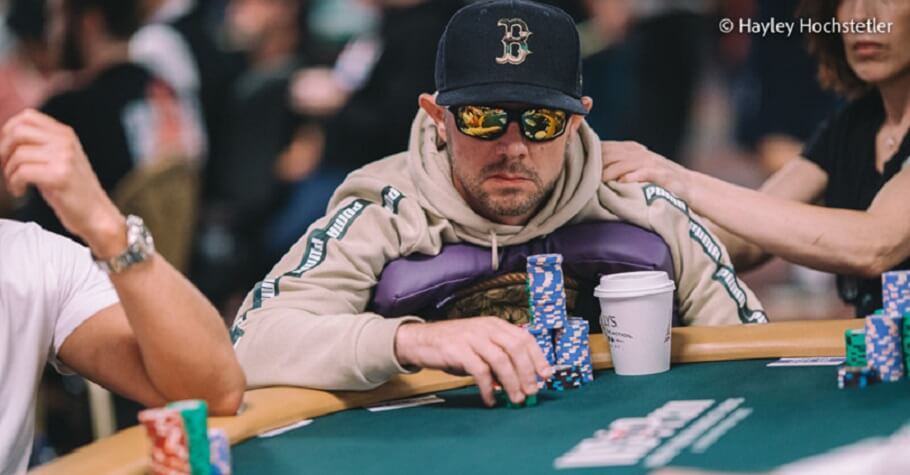 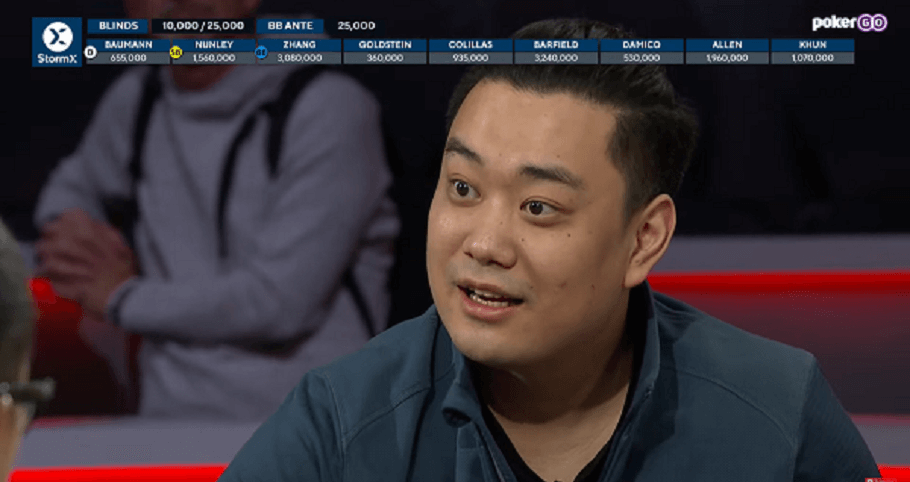 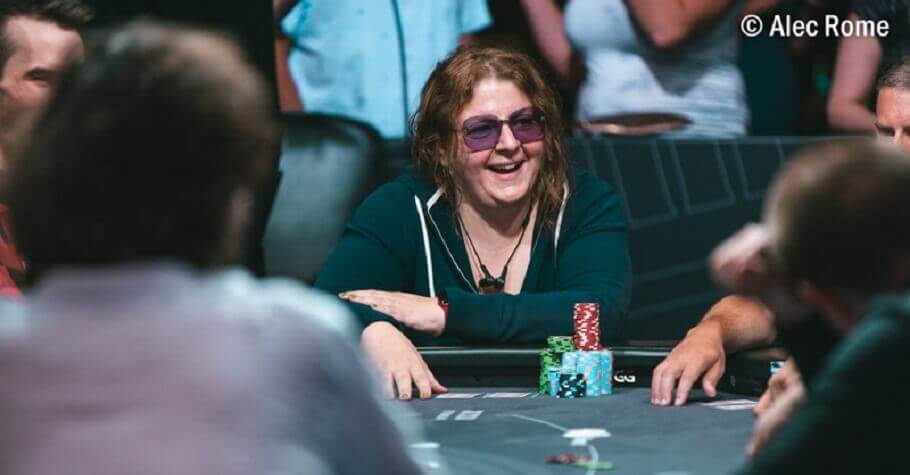