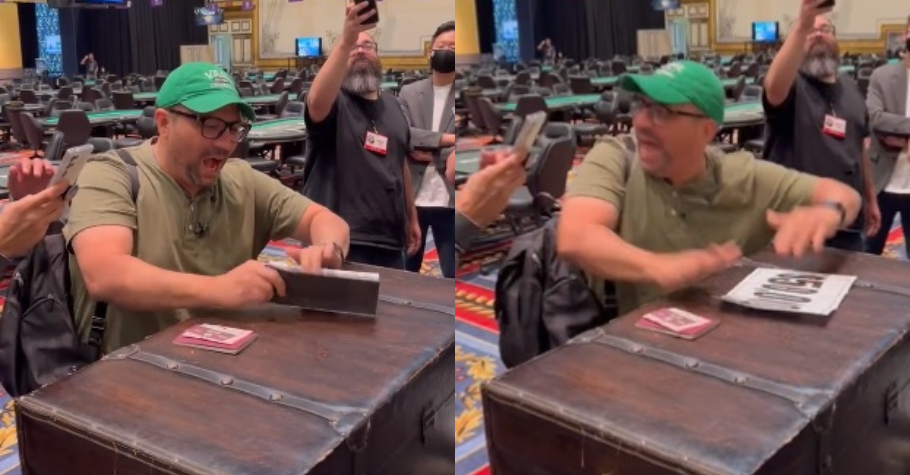 
Isn’t it a good feeling to win a bounty? Of course it is. It was a bounty season at the World Series of Poker (WSOP) 2022. Yes, it was the first time when the $1,000 buy-in Million Dollar Bounty tournament was hosted at the WSOP. And guess what? Players whose stars were perfectly aligned won impressive sums in bounty money. You must have surely heard of Matt Glantz. Yeah! He won the biggest bounty worth a whopping $1 Million. Awesome right?

There’s another jubilant winner in the house. Jose Annaloro won the $50,000 bounty and his joy knows no bounds. This Venezuelan finished in the 15th spot for $38,650 in Event #68: $1,000 Million Dollar Bounty. The tournament was eventually nailed by Quincy Borland for a top prize of $750,120.

Coming back to Annaloro, this player steadily opened the bounty envelope and the moment he realized it was a $50,000 bounty, his hands were up in the air with utter shock and cheerfulness (the French call it joie de vivre)!

Talking about Event #68: $1,000 Million Dollar Bounty, Kevin Hong was the runner-up for $463,610. But the event grabbed a lot of attention, not so much for the winner and how it was the first time when a $1 Million Million Dollar Bounty tournament was hosted. It was all about players pulling out bounty envelopes from the chest.

Glantz, who grabbed the biggest bounty, was clearly on cloud nine when he won it. The world of poker was quick to react to Glantz winning this jaw-dropping sum. One of them was WSOP 2022 Poker Hall of Fame nominee Josh Arieh. He took to his Twitter account and declared Glantz as the mosted HATED guy in poker. Don’t believe us? Click here to read the full story on Arieh reaction to Glantz grabbing the heftiest bounty offered.

May I present to you, the NEW most hated guy in poker!! @MattGlantz I love you buddy! Can I borrow some $ please pic.twitter.com/Q5g8K8ln8S

A similar sentiment was shared by David Williams, WSOP 2004 Main Event runner-up and bracelet winner. He also took to his Twitter and said, “Is there anyone in poker more hated than @MattGlantz ?”

Is there anyone in poker more hated than @MattGlantz ?

David Baker, a good friend of Glantz also shared a post on Twitter moments after news broke that he had won the Million Dollar bounty at WSOP 2022. Baker wrote, “My text thread when @MattGlantz goes up for bounty pull.”

ALSO READ: List of All WSOP Player of The Year Winners

My text thread when @MattGlantz goes up for bounty pull pic.twitter.com/nFvEJ3Pke0

All this after Glantz called the Bounty tournament a “nonsense circus bounty event.” Arieh made sure he reminded the “most hated guy in poker” of his Twitter post.

Josh Arieh reminding Matt Glantz of what he said

Be it winning the top prize or the top bounty, the adrenaline rush of grabbing a bounty—$50,000 or a $1 Million both have the power to change your life. Glantz and Annaloro both are bright examples of a scenario when a bountiful sum pulled from a chest leaves you speechless but makes you super rich in a moment’s time.