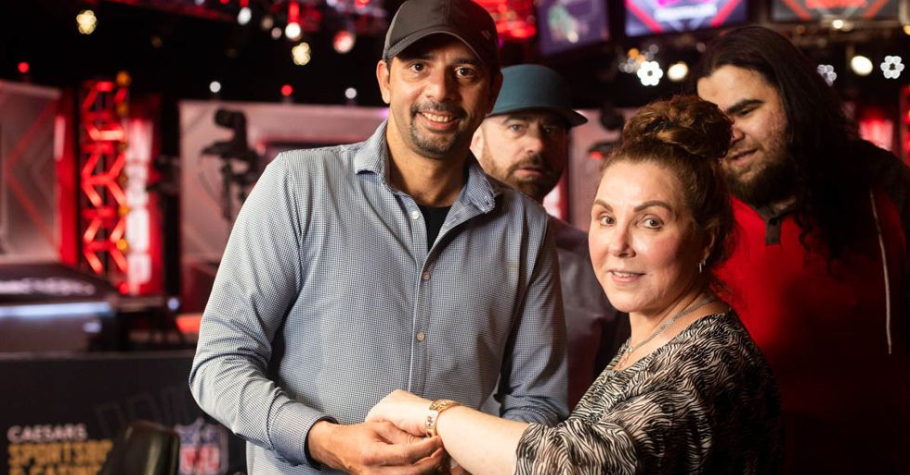 
In a career-defining moment, Raj Vohra, a Florida-based player shipped Event #11: $600 No-Limit Hold’em Deepstack for $335,886. A former tennis pro turned professional poker player, Vohra beat Qing Liu in heads-up to grab his maiden WSOP bracelet. As per Hendon Mob, the new Deepstack winner has $1,722,658 in total live earnings as of June 2022. His best live cash came way back in June 2008 when he finished 5th in the 39th World Series of Poker (WSOP) for $195,834.

Coming back to the Event #11: $600 No-Limit Hold’em Deepstack, this tournament had a prize pool worth $2,914,650. Vohra battled a massive player field of 5,715 to ship the title. It wasn’t a walk in the park for the first-time WSOP bracelet winner who was placed eighth when the final table (FT) was set with 10 players.

The first player to exit from the FT was the short-stacked Bohdan Slyvinskyi who took a pay cheque of $24,883. Qing Liu spiked a Queen on the 5th street. This sadly ended his rival’s journey in the tournament.

Renaud Cellini’s A7 offsuit crash landed into the Stanislav Snitsar’s pocket nines. The former hit a straight draw on the turn but that did not help and he left the tournament with $31,574 in his pockets.

It didn’t take long for Snitsar to look for the exit route, as he too busted at the 8th position for $40,378. Next up was Ralph Marquez who went all-in from the small blind position with A2 only to crash into Vohra’s Pocket Rockets. For his 7th place finish Marquez took a pay cheque of $52,035.

Junxiu Zhang finished on the sixth spot for $67,572 when Liu’s AJ suited dominated Zhang’s QT suited. Michael Lin was shown the door by Hung Tran to finish fifth for $88,417. The former shoved his flush draw holding A7 suited into his rival’s top-bottom two pairs. Lin did not see a third spade and made an exit.

Nicole Limo Greene took the fourth spot for $116,568. One of the two female players on the FT saw her A6 cutoff shove being called off by Vohra from the big blind position with A8 after he tanked for 90 seconds. The board played villain to Greene who left with a six-figure prize money.

Hung Tran took a pathway to the exit door when his A-T straight was drowned by Liu’s flush. With a shocked look on his face, Tran packed up and left but not without taking his prize money worth $154,831.

Check out the final table payouts:

Talking about his maiden WSOP bracelet win, Vohra mentioned, “It’s a dream come true. It’s the best moment of my life. I’ve waited for so many years, at least 15 years, for this moment, and it’s finally arrived. This is just a blessing, having all my friends and family here, my wife, it doesn’t get any better than this. This is it. But this is not the end, this is just the beginning. We got the first one, let’s see how many more we’re gonna get.”

When FT began Vohra had a below-average chip stack at his disposal. He said, “I just wanted to pick out my spots. That’s all. I just had to wait for the right moment and that happened with the nine-deuce. That was the big spot there.”

Vohra shoved all his tournament chips whilst keeping faith in his Big Slick against his rival’s pocket eights. Poker Gods favoured the former Tennis pro when Ace showed up on the turn. Vohra said, “Oh my god, when he had eights and the board came nine-high, I thought there’s no way it’s happening this way. No way. It has to freaking come. I knew the ace was coming or the king was coming. I was 100% sure. It didn’t matter if it would’ve been the river, they’ve sucked out on me for the last 15 years of my life.”

When the newly crowned Deepstack winner was asked about playing more of the $600 tournaments in the coming future he said, “Definitely. Text me the next one.”