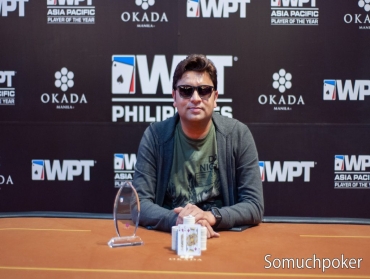 
Players did quite well at the tables of Okada Manila in the 12-day long World Poker Tour (WPT) Philippines. It started on 6 February, and 21 tournaments were played with the WPT Philippines Main Event being the biggest attraction. Yesterday ended with sole Indian representative Vikaash Shah taking down Event #20 for a handsome PHP 334,000. On the other hand, the Main Event also crowned Bulgaria’s Dimitar Blazhev for an impressive PHP 4.81 million!

Event #20 Megastack NLH kicked off at 2 pm local time, the one-day tournament drawing 75 runners (68 unique, 7 re-entries) after each one paid the entry fee of PHP 16,000. This number led to the creation of PHP 982,125 in the prize pool and the money reached the top 10 places.

It was Japan’s Shunsuke to leave the tournament table in 10th position and following him was fellow countrymate Naoya Fujihisa and one after another, eliminations happened. With the elimination of Japan’s Shota Nakanishi, heads-up began between Shah and Kenta Hino. The latter failed to dominate Shah who eventually lifted the WPT trophy along with PHP 334,000 (~INR 4.70 Lakhs) in prize money.

The entire tournament pulled out 344 entries, smashing the prize pool to become PHP 22.52 million which was claimed by the top 43 finishers although the big cuts were claimed yesterday. The final table kicked off with Australia’s Christos Vlahos bringing the largest stack from Day 2.

Korea’s Jongjun Park was eliminated in the 9th place by Rogel Del Rosario followed by Vikaash Shah with Jc Jh failing to beat Blazev’s Ad Ah. Rosario’s second victim was Japan’s Ryo Naito in the 7th place. Shah was the only Indian competitor on the final table where he finished in the 8th position, earning PHP 613,000 (~INR 8.65 Lakhs) as well!

6-handed play began and Rosario accumulated 40% of chips in play but eventually walked out in the 5th place. After two more eliminations, heads-up began with Blazhev having a 2:1 chip lead against Korea’s Kim. The latter holding Kd Jc raised to 400k and Blazhev three-bet shoved with Ac 9d and got a call from Kim who put his tournament life at risk.

For the latest updates on poker industry news and other tournament taking place around the world, keep reading GutshotMagazine.com and stay tuned!