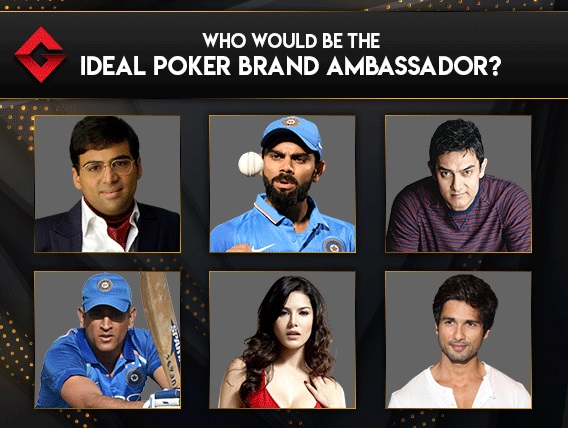 Who would be the ideal poker brand ambassador in India?


All the top poker companies in India are looking for ways to grow the community and one major way of doing so is by partnering with the biggest celebrities in the country. Whether an actor or sportsman or someone excelling in another industry, these celebrities are loved and them promoting poker massively helps the development of the mind sport in India.

Most of these companies have associated with known brand ambassadors including actor and presenter Rannvijay Singha who endorses Spartan Poker, cricketer Chris Gayle who promotes Adda52, boxer Vijender Singh being the former brand ambassador for PokerBaazi, actor Nawazuddin Siddiqui being the face for PokerStars India and so on…

Just for fun and curiosity, Gutshot recently conducted a small survey to know who the community believe would be the ideal brand ambassador for an existing or upcoming poker brand in India. While some voted for their favourite sportsmen, many thought that Bollywood actors would do a good job while a few poker players also made the list. Take a look:

He may not have played a single game for India since the semi-final loss at CWC 2019, but that hasn’t affected Mahendra Singh Dhoni’s popularity. He has as many fans in the poker industry too, as he received the maximum votes in this short survey. From leading Chennai to multiple IPL victories to hitting that winning six in the 2007 ICC World Cup, this man has done it all. Cool and composed, and the ability to make the right decisions are exactly the qualities we look for in poker players, so MSD certainly fits the bill. With probably the biggest fan base for a cricketer in India, Mahi will give the game the positive influence it requires. People love him not just for his big hitting but also for his genius brain. Already a brand ambassador of fantasy sports leader Dream11, the former Indian captain could also do the same for poker one day!

Cricket is like a religion in India and it’s no surprise that our current Indian captain Virat Kohli received the second-most number of votes to become a poker brand ambassador. Arguably the best batsman on the planet, Kohli is aggressive on the field which is sometimes needed when playing against smaller stacks in poker too. Already having 70 international centuries, Virat is ambassador to several brands and he has also entered the gaming space, promoting Mobile Premier League (MPL) which is an up and coming online gaming platform.

It’s been over 15 years that Shahid Kapoor made his Bollywood debut and his latest hit Kabir Singh broke all records at the box office. It’s not a hidden fact that Shahid loves a game or two of poker when he has time away from shooting, and his passion for the game has driven him to organize nightlong games in his house with close buddies, including actor Harman Baweja, who is an active player in the circuit. His avid interest in the game and his connect with his fans could make him a good contender to be the next big poker brand ambassador!

Poker and Bollywood have a very close relationship and another big name who has confessed poker to be his guilty pleasure is Aamir Khan, an actor who has produced more hits than most other seasoned actors in India. With a good image for the type of movies he has done and a huge fan base, Aamir could easily help the poker community grow if he decides to step up and promote poker in India. If we’ve heard right, his Union Park bungalow has 5 tables dedicated to poker and this kind of craze for the game will make his job easier!

Poker is nothing but a game of math, skill, probability and analytics and it’s not very uncommon to see references being drawn between poker and chess. Viswanathan Anand is one of the best chess players in India and possibly the world too! Poker is a cerebral game of skill, and the same is epitomized by Vishy. Having a chess celebrity endorse poker will lend more credence to the game, as compared to a Bollywood or cricketing personality. Anand has already endorsed the Poker Sports League which massively helped them when they hosted their inaugural edition in India!

Former adult actress and current Bollywood diva Sunny Leone has a huge following in India, being the most Googled celebrity in India, even more than our Prime Minister, Narendra Modi. We’re sure that Sunny Leone advocating poker would have a tremendous impact on the game. Sunny has associated herself with many gaming brands in the past, endorsing PokerBaazi, Jeetwin, a rummy brand and now also fantasy sports portal, 11Wickets! Quite a few of our readers believed she’d be the ideal brand ambassador for poker!

This man needs no introduction as he’s one of the highest earning poker players of all time, with $42 million in live tournament cashes across the world. There’s no question about his talent and popularity among poker communities around the globe. Having endorsed PokerStars for over 12 years, Negreanu recently quit the global leader and later joined GGPoker as brand ambassador!

We got plenty of votes for our own Indian pros as well, including our bracelet winners Nikita Luther, Abhinav Iyer and Aditya Sushant. Probably one of the best poker players in India, Aditya Agarwal also received a few votes, currently already a brand ambassador for PokerStars India. With $1+ million in live cashes, Agarwal has been around longer than most others in the industry and is one of the reasons that poker has boomed in India over the years!

For more updates on the Indian poker and gaming industry, stay tuned to GutshotMagazine.com!