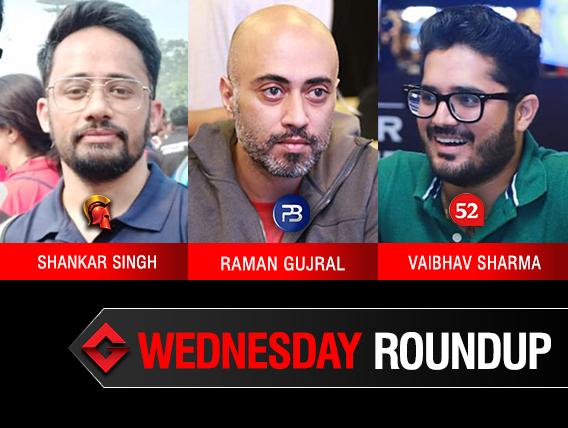 
The pace of the online action picked up slightly from Tuesday as we hit the mid-week mark last night. By now the poker aficionados are quite aware of the travel packages and bigger guarantees on offer. Headlining Wednesday on Spartan Poker was Destiny 13.0 INR 30 Lakhs GTD followed by PokerBaazi’s signature Wednesday tourney The Pride assuring INR 10 Lakhs and Maverick on Adda52 promising INR 10 Lakhs GTD. And here is a complete summary of Wednesday majors…

Spartan Poker’s Wednesday marquee event Destiny 13.0 INR 30 Lakhs GTD pulled out 609 runners after each one paid INR 5,500 individually to enter the tournament. The prize pool was slightly higher than the advertised guarantee out of which the largest portion was taken away by circuit regular Shankar Singh aka ‘ManiacKid’ who defeated ‘McFly’ in heads-up to reserve his seat in Destiny SnG Finale!

PokerBaazi’s Wednesday flagship event The Pride INR 10 Lakhs GTD generated a prize pool of INR 10.74 Lakhs. This amount was distributed to the top 45 finishers out of a total of 358 entries. A well-known figure in the industry, Raman Gujral aka ‘ifryu’ ended up knocking out Harsh Kumar aka ‘100crdream’ in heads-up to pocket INR 2.25 Lakhs in prize money. Kumar earned INR 1.57 Lakhs for settling in the runner-up position.

INR 2,500 was the buy-in to enter the Maverick INR 10 Lakhs GTD on Adda52 which garnered 512 entrants, enough to cross the guarantee and create a higher prize pool of INR 11.64 Lakhs. After 7+ hours of intense grinding session, it was Vaibhav Sharma aka ‘alienrobot’ to outlast Vinay B aka ‘ContemporisT’ in heads-up. Sharma added INR 2.79 Lakhs, boosting his poker bankroll while his opponent managed to settle for INR 1.63 Lakhs in the second position.

PokerStars’ Wednesday flagship Night on Stars INR 5 Lakhs GTD kicked off at 7:30 pm last night and the action picked up the pace with 273 entrants after each one paid INR 2,200 buy-in. The guarantee was surpassed generating INR 5.46 Lakhs which was distributed to the top 47 places who locked up at least INR 3,850 min-cash. After the dust had settled, it was an anonymous player ‘Sriko5’ who conquered the field by eliminating ‘ARYAN5’ in heads-up to bag INR 1.03 Lakhs in prize money.

9stacks hosted StackUp Turbo INR 1 Lakh GTD which enrolled a total of 95 runners after each one chipped in INR 1,100. The competition continued for over 4 hours and eventually it was ‘KESHRIVARATALAP’ who battled out his opponent ‘AKfishing’ in heads-up to take home INR 27,000 in prize money.