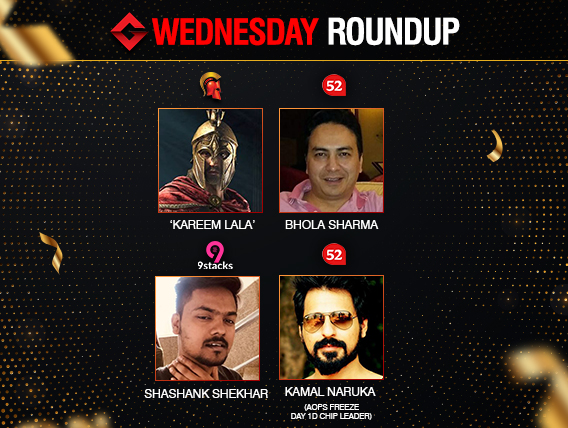 
The action picked up last night as we hit the mid-week mark. The online felts put down some bigger guarantee tournaments along with travel packages. One of the popular tournaments on Spartan Poker, Destiny displayed INR 30 Lakhs GTD in prize money. Adda52 Online Poker Series (AOPS) currently underway, yesterday wrapped up Day 1D of the AOPS Freeze INR 25 Lakhs GTD! So, let’s take a quick look at Wednesday majors…

The headlining event on Spartan Poker last night was Destiny 13.0 INR 30 Lakhs GTD displaying a buy-in of INR 5,500. The tournament registered a total of 549 players which was enough to surpass the assured amount and create INR 32 Lakhs in the prize pool. The top 60 places benefited from the same but the only player to take away the largest chunk was ‘Kareem Lala’ after the players decided to settle for a 4-way deal that saw ‘joyi2492’ in the runner-up position.

INR 3,300 was the buy-in to enter The Pride INR 10 Lakhs on PokerBaazi last night. The tournament attracted a total of 334 runners out of which the top 36 places ended in the money. It was at 2:41am that ‘Chubbycho’ captured the winner’ prize money of INR 2.21 Lakhs only after defeating Anuj Yadav aka ‘brockLesnar95’ in heads-up. The runner-up eventually took home INR 1.55 Lakh.

Adda52’s Wednesday feature was a part of the ongoing AOPS, Maverick INR 15 Lakhs GTD garnered a massive field of 763 entries after each one paid INR 2,500 buy-in. The advertised guarantee was crossed to create INR 17.35 Lakhs in prize pool and the top 82 finishers earned a share for their efforts. Powering through this field was Bhola Sharma aka ‘bhola’ who captured the first-place prize money of INR 3.53 Lakhs after outlasting ‘Amod1001’ in heads-up. The latter walked out with INR 2.74 Lakhs for the runner-up position.

Another major attraction besides the daily tournaments on Adda52 was AOPS Freeze INR 25 Lakhs GTD. Yesterday concluded Day 1D which enrolled another set of 129 runners. The tournament that started at 9:30 pm declared the chip leader by midnight. It was online reg Kamal Naruka aka ‘ksn123’ to bag the largest stack of 142,971. Following him were Sanat Mehrotra aka ‘mehro2511’ with 137,688 chips and ‘4AcesClub’ bagging 135,747 chips.

A total of 262 players entered PokerStars’ Night on Stars INR 5 Lakhs GTD after each one paid INR 2,200 buy-in. Eventually, the guarantee was surpassed creating a slightly bigger prize pool of INR 5.24 Lakhs out of which ‘GTO_LIFE_GG’ took away the biggest share of INR 94,544 only after settling for a heads-up deal which saw ‘iAlwaysHaveit’ in the runner-up position for INR 79,512.

9stacks’s flagship tournament, StackUp Turbo INR 1 Lakh GTD had a buy-in of INR 1,100. The entire event collected 104 players out of which only the top 15 finishers ended in the money receiving a share from the final prize pool. After hours of grinding, online crusher Shashank Shekhar aka ‘biharibhaia’ pocketed INR 28,080 in prize money after knocking out Rahul Bhura aka ‘chanakyax’ in heads-up who settled in the runner-up position and adding INR 17,760.

Last night at 8 pm PokerSaint (sign-up with code “GUT100”) hosted Wed-400k GTD that pulled out 153 players, each chipping INR 1,650 as buy-in. Over 5 hours of an intense grinding session it was Yashas Ramesh aka ‘Nimappa93’ to seize the day, eliminating ‘rajsuk3655’ in heads-up. Ramesh added INR 69,148 in prize money to his poker bankroll. For the latest updates on live and online poker tournaments keep reading GutshotMagazine.com and stay tuned!