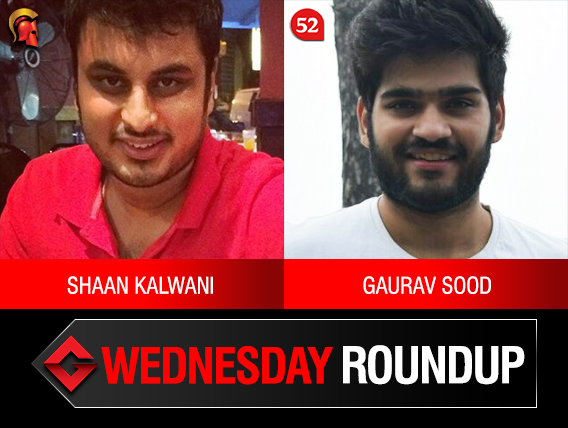 
Wednesday night showered huge cash prizes to the online crushers, one of which was Destiny 12.0 INR 25 Lakhs GTD on Spartan Poker. As stated earlier, the Spartan Super Series (SSS) is currently underway and this featured tournament was a part of Event #17 of the series. And here is a quick summary of Wednesday night…

Now, every online grinder is well-aware about Destiny 12.0 INR 35 Lakhs GTD hosted on Spartan Poker. This series organizes 10 tournaments and 10 worthy winners appear on the SnG Finale to grab the ultimate Las Vegas package. Wednesday night’s featured tournament is quite a popular one, enticing a massive number of 767 entries with each player chipping in INR 5,500 buy-in. The tournament ran for 8 long hours until the winner Shaan Kalwani aka ‘shaankalwani’ emerged victoriously, taking the seat to SnG Destiny Finale after settling for a 4-way deal with Kalwani having the largest stack, walking away with the first-place prize money.

Gutshot Magazine got in touch with the runner-up, Jay Pandya aka ‘Ba Ba Black Sheep’ who expressed, “I was very happy with my win. I am not a regular player but was glad to see that poker in India is becoming extremely competitive. I sometimes watch Tiger10, Kill Ivey, David Blaine competing. Finishing second against such a field was motivating and encouraging. Looking forward to going deep in such tournies.”

The previous night at 8 pm, Pokerbaazi hosted G.O.A INR 20 Lakh GTD which observed a good field after the players chipped in INR 5,500. 9-hour long haul, anonymous yet known player in online felts, ‘Vishzz’ emerged victoriously and walked away with INR 3,70,000 after defeating ‘blackcod’ in heads-up. The runner-up managed to add INR 2,67,000 to his poker bankroll.

Wednesday nights are reserved for Maverick INR 10 Lakh GTD on Adda52. Several hopefuls took to their seats for a buy-in of INR 2,500. Winning back-to-back titles last week on different online platforms, Gaurav Sood aka ‘gauravarod’ claimed Wednesday night for INR 2,50,000 pushing ‘dhawalmakani’ into the runner-up position. Any online regular would know Sood, the emerging face who also recorded a runner-up finish in 2019 APT Vietnam PLO back in July.

As usual, the prize pool was shared among the top notables including Sushant Singh aka ‘Sush22’ (3rd), Sanish Chhabra aka ‘sanish21’ (5th), Sahil Mahboobani aka ‘ImHighIshove’ (18th), Naren Purohit aka ‘IMUNAGI’ (20th), Chirag Bhardwaj aka ‘mahikk’ (33rd) and others.

PokerStars hosted Night on Stars INR 5 Lakhs GTD at 7:30 pm sharp. And yesterday saw the guarantee being surpassed to create a prize pool of INR 6.3 Lakhs. Claiming the day and walking out with the first-place prize money, ‘Flipper108’ shot 4 bullets in the entire tournament. In the last hand, the players settled for a 3-way deal and ‘Flipper108’ carrying the larger stack appeared the winner tonight adding INR 1,00,354.

9stacks hosted StackUp INR 2.5 Lakhs at 7:59 pm sharp, outlasting the field was an anonymous player ‘Kasthalas’ who shipped the tournament for INR 67,500. The field was good enough to reach the guaranteed amount as each entry paid INR 1,650 buy-in.

5 intense hours into the tournament, the notable players to cash include Rachit Parihar aka ‘meepo’ (8th), Raj Kumar Gahlot aka ‘Fireman’ (15th) and so on. For the latest updates on live and online poker tournaments keep reading GutshotMagazine.com and stay tuned!