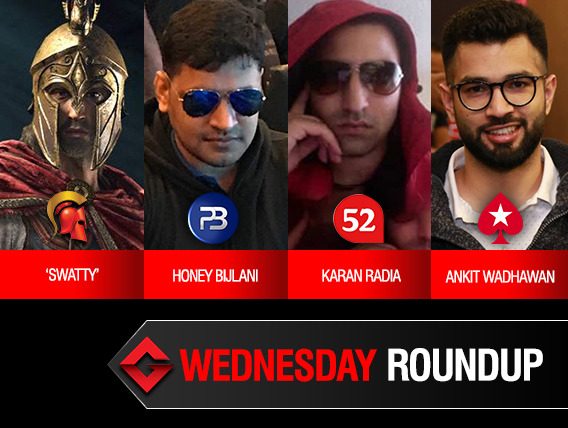 
Mid-week is here and virtual felts are still blazing fire! Undoubtedly, the pace of action picked up from Tuesday with Spartan Poker’s double feature Mega Freeze INR 4 Lakhs GTD running beside Destiny 13.0 which assures the top 3 Destiny SnG Finale players a trip to Vegas! Other platforms too, PokerBaazi’s The Pride and Maverick on Adda52 assured great prize pools and hefty prize money. And here is a summary of Wednesday majors…

Spartan Poker’s Wednesday headlining tournament was the popular Destiny 13.0 INR 30 Lakhs GTD which garnered 590 entrants for INR 5,500 out of which the top 60 places strolled out with a share from the prize pool. It was an anonymous grinder ‘swatty’ who came out on top after the players settled for a heads-up deal that saw ‘KaalaPatthar’ in the second position.

Spartan Poker’s double feature introduced Mega Freeze INR 4 Lakhs GTD that kicked off at 9:30 pm. A total of 148 runners pounced on the field after paying INR 3,300, individually. This number was enough to generate a bigger prize pool of INR 4.44 Lakhs and it was ‘SuperStorm66’ to capture the winner’s prize after the players struck a heads-up deal and Shakir Mohammad aka ‘Nochance’ settled in the runner-up position.

The top 20 finishers earning a payout include Anmol Mehta aka ‘Anzzzzz’ (3rd), Parminder Randhava aka ‘Bounceez’ (12th), Neel Joshi aka ‘Worm33’ (18th)Chandan Arora aka ‘MeStrongYouFold’ (19th) and so on.

PokerBaazi’s Wednesday tourney The Pride INR 10 Lakhs GTD crowded 324 entrants after each paid INR 3,300 buy-in. A well-known circuit grinder, Honey Bijlani aka ‘ho9ey’ ended up knocking out ‘Ballack’ in heads-up to pocket INR 2.20 Lakhs in prize money while his opponent earned INR 1.55 Lakhs for settling in the runner-up position.

INR 2,500 was the buy-in to enter the Maverick INR 10 Lakhs GTD on Adda52 which garnered 496 entrants, enough to cross the guarantee and create a higher prize pool of INR 11.28 Lakhs. After 7+ hours of intense grinding session, it was online grinder Karan Radia aka ‘Reg_Slayer’ to outlast ‘BaniyaKiller’ in heads-up. Radia added INR 2.7 Lakhs, boosting his poker bankroll while his opponent managed to settle for INR 1.57 Lakhs in the second position.

PokerStars’ reserves Wednesday for Night on Stars INR 5 Lakhs GTD which kicked off at 8 pm last night and the action picked up the pace with 232 entrants after each one paid INR 2,200 buy-in. After the dust had settled, it was Ankit Wadhawan aka ‘b00mtr00p3r’ who conquered the field after eliminating Chandan Arora aka ‘RunBarryRun’ in heads-up to bag INR 96,466 in prize money.