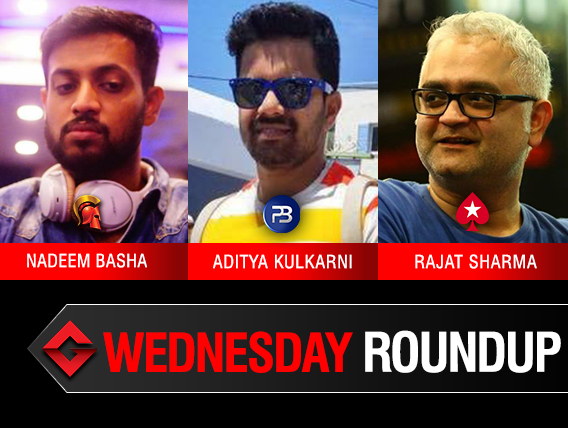 
And it was a fantastic and a glowing start to the new year and virtual felts also welcomed the day with enough enthusiasm. 1 January 2020 was all about the destination packages which also includes a terrific bundle of cash prizes across the major platforms. So, let’s have a look at the top finishers and champions who took down the flagship events. And here is a complete summary of Wednesday majors…

While the world was busy cheering up and welcoming the new year, numerous passionate poker players were showcasing their skills on this big day and the worthy winner took away the title of the night. Spartan Poker hosted Destiny 12.0 INR 25 Lakhs GTD which clocked 533 entrants for a buy-in of INR 5,500. The event saw the guarantee being surpassed to create a higher prize pool of INR 26.65 Lakhs, a slice of which was taken away by the top finishers. Dominating this powerful field was a prominent face in the online circuit, Nadeem Basha aka ‘blindgame’ who eliminated another renowned player Rajat Sharma aka ‘Garammasala’ and shipped the entire tournament last night. Basha definitely added a valuable title to his poker career and will now be seen in the Destiny SnG Finale.

The tournament making headlines on PokerBaazi was G.O.A INR 20 Lakhs GTD, another event that promises the winner all expenses for a trip to Goa! A total of 337 players took their seats for INR 5,500 but the one to claim the biggest share from the prize pool was a well-known circuit grinder Aditya Kulkarni aka ‘adit11’ who defeated ‘AllinMaestro’ for INR 3.8 Lakhs. Eventually, the runner-up walked out with INR 2.75 Lakhs.

The PokerBaazi Monthly Value Series (PMVS) is here guaranteeing a massive INR 1.3 Crore! Yesterday lined up a couple of events with the biggest being PMVS Event #2 INR 7 Lakhs GTD. The second tournament of the day began at 8 pm sharp, registering 277 players, each one of whom chipped in INR 2,750 buy-in. Riding past the field was Pranav Desai aka ‘GarviGujarat’ who defeated Tathagata Sengupta aka ‘Tintin84’ in heads-up to secure INR 1.54 Lakhs. However, Sengupta settled for the runner-up position for INR 1 Lakh.

Dominating a field of 424 entries was an anonymous player ‘chirandh’ who topped the list and claimed the first-place prize money in Adda52’s Maverick INR 10 Lakhs GTD. Wednesday night’s feature tournament came with a fixed buy-in of INR 2,500 and the prize pool was eventually distributed among the top 43 places. However, the late-night tournament ended with a heads-up deal and ‘chirandh’ added INR 2.17 Lakhs to his poker bankroll while ‘jimmyadams’ settled for the runner-up position for INR 1.8 Lakhs.

Rajat Sharma did not back down and raced to triumph PokerStars flagship Wednesday event, Night on Stars INR 5 Lakhs GTD after finishing in the second place in yesterday’s Destiny 12.0 (read above). The renowned player in both live and online felts, Sharma plays under the username ‘sharabikebabi’ who fired three bullets to rail out ‘ravi.xo’ for INR 97,777 in prize money and the anonymous runner-up settled for INR 72,325.