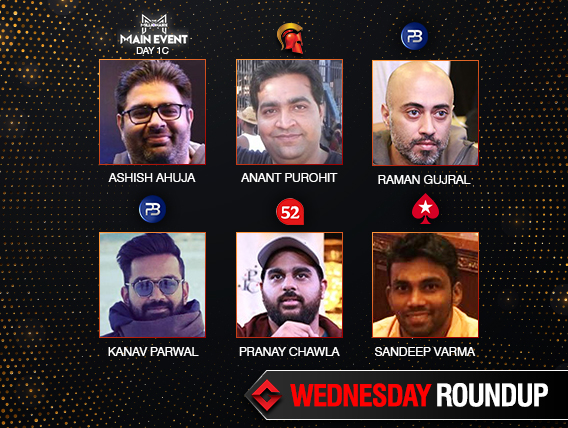 
The action continues to intensify as we hit the mid-week mark last night. Dominating the action on the virtual felts was Day 1C of Spartan Poker’s Millionaire Main Event INR 3 Crore GTD that ran simultaneously with Destiny 13.0. On the other hand, the PokerBaazi Monthly Value Series (PMVS) lined up 4 tournaments offering the players a chance to take home massive rewards! And here is a complete summary of the Wednesday majors…

IOPC Event #72 The Millionaire Main Event INR 3 Crore GTD has become a major attraction on Spartan Poker. Yesterday over 4 hours of grinding concluded Day 1C attracting a total of 351 runners for a buy-in of INR 11,000. A prominent face in the industry, Ashish Ahuja aka ‘Spewushhhiiiii’ who has been under the limelight for quite some time this year, raced to bag the largest stack of 245,655 last night. Ahuja, the 2020 BPT Kick Off Event champion is followed by ‘CrownUpJr’ with 222,074 chips and ‘Rodeo123’ with 184,346, rounding up the top three finishers of the third starting flight.

Running alongside the Millionaire Main Event on Spartan Poker was Wednesday’s marquee event, Destiny 13.0 INR 30 Lakhs GTD. By now the poker fanatics of the country are well aware that the top 3 winners of the Destiny SnG Finale are offered a Las Vegas package!

This edition of Destiny pulled in a total of 824 players, which was enough to crush the advertised guarantee and generate a final prize pool of INR 41.20 Lakhs. The top 70 finishers earned a min-cash. Anant Purohit aka ‘Pro’, bagged his second IOPC title after the players settled for a heads-up deal which saw Abhishek Goindi resting in the runner-up position. It’s been a good IOPC for Purohit who also who finished 5th in the Millionaire Legends tourney on Sunday night.

Running between 5-9 February the PokerBaazi Monthly Value Series (PMVS) conducted 4 tournaments on Wednesday. Event #2 The Pride INR 10 Lakhs GTD attracted 418 players after each one paid INR 3,300. The displayed guarantee was crossed to become INR 12.54 Lakhs in prize pool and the top 54 finishers earned a portion of the same. At 2:51 am, when the dust had settled, Raman Gujral aka ‘ifryu’ secured INR 2.52 Lakhs in prize money. The champion defeated ‘fnatics’ in heads-up who managed to add INR 1.76 Lakh to his bankroll.

At 9 pm, PokerBaazi hosted Event #3 of the ongoing series promising INR 7 Lakhs GTD. For a buy-in of INR 2,750 a total of 291 players registered themselves. Once again, the guarantee was surpassed, and INR 7.27 Lakhs in prize pool was drawn. The largest chunk of the same was won by Kanav Parwal aka ‘sokopa’ who railed out ‘sunit’ in heads-up for INR 1.60 Lakh in prize money.

INR 2,500 was the buy-in to Adda52’s featured tournament Maverick INR 10 Lakhs GTD. Garnering 507 players in total, the guarantee was passed, creating a higher prize pool of 11.53 Lakhs which was shared among the top 55 places. Eventually,  after hours of grinding, claiming the lion’s share of the same was the 2019 IPC 100k Highroller champ, Pranay Chawla aka ‘setmeup’ who grabbed INR 1.8 Lakhs after defeating ‘ContemporishT’ in heads-up.

Sandeep Varma outlasted a field of 264 entries on PokerStars’ flagship tournament Night on Stars INR 5 Lakhs GTD. The buy-in to the tournament was INR 2,200 and the top 44 players benefited from the final prize pool of INR 5.28 Lakhs. Varma aka ‘effuno007’ captured the winner’s prize of INR 1 Lakh after knocking out ‘Wabi_$abi’ in heads-up. The runner-up managed to take home INR 74,447 for his efforts.