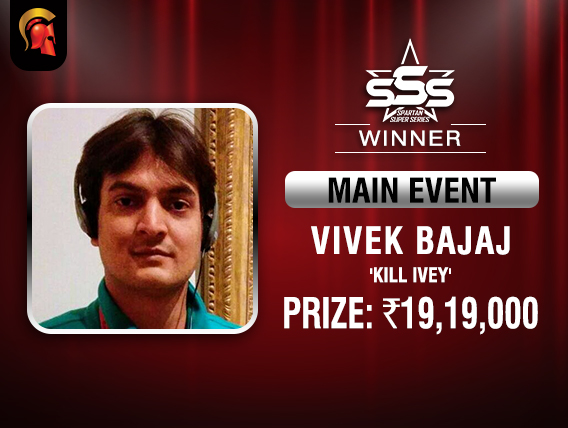 
When Spartan Poker launched another edition of the Spartan Super Series (SSS) at the start of this month, everyone had eyes mostly on the SSS Main Event INR 1 Crore GTD, which had a steep buy-in of INR 11,000 but clearly, there were much bigger prizes to be won in this tournament.

Yesterday was the final day of the series and while there were other tournaments also scheduled, the attention was all on SSS Event #37, where a total field of 798 entries participated in the Main Event. From them, the top 79 places all received a minimum pay-check of INR 34,000, which was more than triple the original buy-in.

It was well into Monday morning when the tournament had finally reached its final stages and some of the best pros in India were all knocked out by then, some cashing and some walking away empty-handed. Heads-up took place with Vivek Bajaj aka ‘Kill Ivey’ pitted against ‘SANDYINC.’

Bajaj has won a few titles on Spartan Poker in the past but has always wished to stay anonymous prior to this victory. However, he bagged a life-changing score of INR 19,19,000 when he took down the SSS Main Event and he will surely be a happy man after this performance. As for SANDYINC., the player also bagged a 7-figure score of INR 12,04,000.

The final hand took place in Level #54 by when Bajaj had already created a chip lead of over 2:1 over his opponent. He was dealt Pocket Kings and he would’ve felt the winning moment near. SANDYINC. decided to shove all-in before the flop with Td Js and Bajaj wouldn’t have hesitated much before making the call. The board ran out Ad 2h 7d Qc 4s and there was no help for SANDYINC., while Bajaj would’ve jumped around in joy after his Kings won him the prestigious SSS Main Event on Spartan.

Stay tuned to GutshotMagazine.com for all similar updates on the biggest and best poker tournaments in India and across the world.