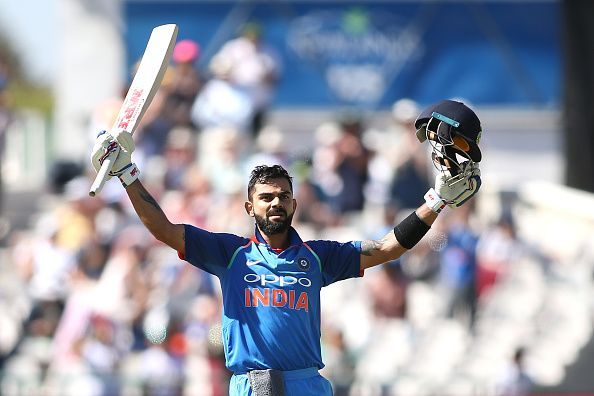 
The CEAT Cricket Ratings came into formation in 1995, as a body that would rate performances of cricketers over a 12-month period and reward the highest rated players each year. The ratings keep in mind excellence in batting, bowling, fielding and wicket-keeping in the test and ODI cricket formats.

The 12-month period ends in April each year and once again, players were invited to the CEAT Cricket Ratings Awards, where Virat Kohli, Rashid Khan and Harmanpreet Kaur took home top honours. The prestigious event took place in Mumbai on the evening of 28th May and all eyes were on who would walk away with the CEAT Cricketer of the Year award.

It was no surprise that the Indian cricket captain Virat Kohli won this award for the third time in his career. He now joins legendary Sri Lankan spinner Muttiah Muralitharan as the only cricketers to have received this award thrice in their respective careers. There’s often talk that Kohli is the best to have ever played the game, and three ‘Cricketer of the Year’ awards at the age of just 29 years solidifies that argument.

Kohli was not present at the function so his teammate Rohit Sharma collected the award on his behalf. Kohli had a brilliant last 12 months in international cricket (not for the first time), now only behind Sachin Tendulkar on the list of most ODI centuries – 35. With at least 4-5 years left in his international cricketer, it’ll be interesting to see if Kohli can become the first to win this award four times!

Another person who is growing in stature as a cricketer is Rashid Khan, who finished as the second highest wicket-taker in the recently concluded IPL 2018. Coming from a country like Afghanistan that doesn’t have many opportunities in international cricket, Rashid has done brilliantly to become a part of T20 leagues around the world, still only 19 years old.

“I love his attitude towards the game. He is always smiling and looks to be enjoying. Sorry, you didn’t enjoy much yesterday. But keep up that spirit. You’re a great ambassador for your country. I think you should be the Prime Minister of Afghanistan,” said Farokh Engineer to Rashid Khan, a day after Rashid lost in the IPL final.