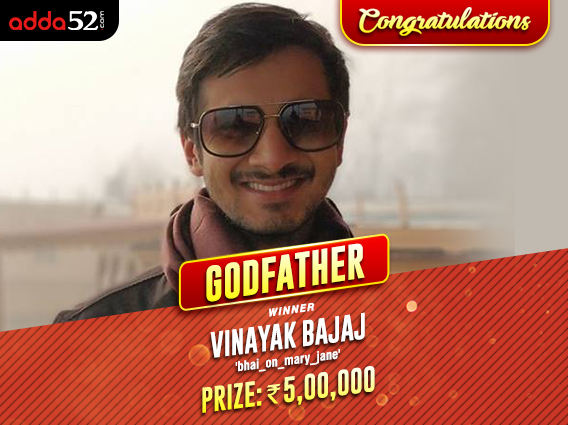 
Most of the top poker players across the country headed over to Goa last night for the start of the DPT Colossus series, where Gokul Krishna leads the chip counts after Day 1, with 19 players still in action. This provided a good chance for hundreds of other players who are always in contention in major online poker tournaments.

Adda52’s Thursday night tournament is Godfather INR 20 Lakh GTD and it happens to be one of their most popular featured tournament, as it offers big prize money as well as the chance to win an international poker trip. Last night was another Godfather tournament and the player to take it down ended up being Vinayak Bajaj aka ‘bhai_on_mary_jane’.

Bajaj paid the entry fee of INR 5,500 like everyone else in the field of 378 entries as the tournament kicked off at 8pm last night. Nearly 8 hours later, at 3:51am this morning, we had a winner after some breath-taking poker action between some of the top names in the country.

The top 38 places were paid out a min-cash of INR 12,000 and some known players to get min-cashes were Siddarth Singhvi, Rohit Mishra and Ashish Ahuja. Many more known names busted along the way to the FT including India’s two WSOP gold bracelet winners – Nikita Luther busted in 13th place while Aditya Sushant hit the rail in 11th place.

The competition only got stiffer as Danish Shaikh aka ‘King0fMerge’ was the next big name to be eliminated in 8th place, while Chandan Arora aka ‘darkfish15’ exited in 6th place. Recent Mega Suits winner Gaurav Sood aka ‘gauravarod’ won the first 6-figure cash of the night, finishing 5th for INR 1.05 Lakh.

Gayle Storm 3.0 winner Sanish Chhabra aka ‘sanish21’ was the next to go, picking up INR 1.6 Lakh for finishing 4th, while Gayle Storm 2.0 winner Rahul Melwani aka ‘therealslowroller’ followed him in 3rd place for INR 2.2 Lakh. That’s when heads-up began between Bajaj and Kunal Vohra aka ‘kvohra’ and it wasn’t too long before the former put the game to rest on Adda52.

Vohra ultimately wasn’t good enough for the eventually champion, taking away INR 3.03 Lakh as runner-up prize. On the other hand, Bajaj emerged champion for a massive bankroll addition of INR 5,00,000. He’ll now be looking forward to playing the SnG and winning an international poker package! Speaking to Gutshot, Bajaj said, “It just feels amazing to win a signature high value tourney like Godfather. I don’t play much on their website because of their non friendly tax policies but they also have some amazing games like these.”

Talking about the tournament itself, he added, “The first couple of hours in the tournament, I was pretty card dead. After my first double up things started to fall in place for me. The key hand was when I raised, and someone jammed 25 Big Blinds with AJo. I had AK. It held. After that I just played patiently and entered the FT as the chip leader. I was the short stack at one point in time 3-way but seemed like it was my day. The structure of the tournament is also quite deep, which makes it much more fun. The winners also get a sit-and-go for a package which I am looking forward to. Adda52 should have more such high value tournaments.”

For all updates on Adda52 tournaments as well as other poker action from across the country, keep following GutshotMagazine.com.