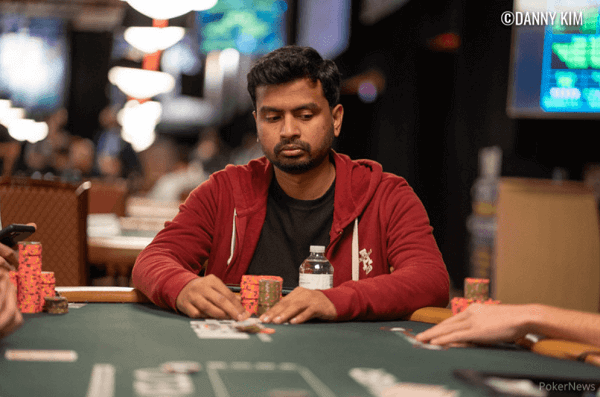 
It’s truly a Happy Diwali in the household of Vikranth Anga and for the entire Indian poker contingent at the 2021 World Series of Poker (WSOP) because we had a final table finish and a pretty massive score to go with it as well. Anga registered to Event #64 $5,000 Mixed No-Limit Hold’em/Pot-Limit Omaha and today on Day 2 of the tournament, a great run ended as he cashed in 8th place!

He was pitted against some of the best Mixed Game specialists from around the world, with 579 entries joining the field, pulling the prize pool up to $2.67 million. 87 players made the money and Anga will be supremely happy with this run because those who busted before him included bracelet winners Brian Rast, Hossein Ensan (2019 Main Event winner), Erik Seidel, Jason Somerville, Tommy Le and many others too.

In fact, there was another Indian-origin player in the mix—Vidur Sethi. Having already recorded one deep run in WSOP 2021 in the past, he finished 24th in this tournament. Sethi took a pay cheque of $17,923 (around ₹13.33 Lakh). Anga kept going until he reached the final table (FT) and that’s where his run finally came to a halt.

After doubling up on the FT, Anga, unfortunately, hit a spot of AK vs KK where the board didn’t open up an ace which left his stack crippled. Anga was left with only 65K chips, which he then shoved in the very next hand, with A5 suited against David Prociak’s T3 suited. There too, it wasn’t the best board for Anga as Prociak spiked a T on the flop itself, which held right through. His amazing run, however, paid him very well. Anga became India’s highest cash so far in 2021 WSOP after Abhinav Iyer took home around $41K a few days ago for his 12th place finish in Event #56. Anga added $53,824 (around ₹40 Lakh) to his poker bankroll, which is also career-best live cash for the player.

Another Indian player in the 2021 WSOP who battled it out like a pro was Dhaval Mudgal. This 2018 WPT Vietnam champion busted 30th for around $7,000 in Event #61: $600 Deepstack Championship No-Limit Hold’em. Mudgal went all-in for 1,900,000 with hole cards A3, and Rubin Chapell called with his pocket tens. The board opened K76K3. This is where Mudgal’s journey ended, as his ace did him no good. Chapell raced ahead with a higher two pair, and the Indian player bid adieu to his bracelet dream. Well, the hunt for India’s first bracelet at the 2021 WSOP continues.