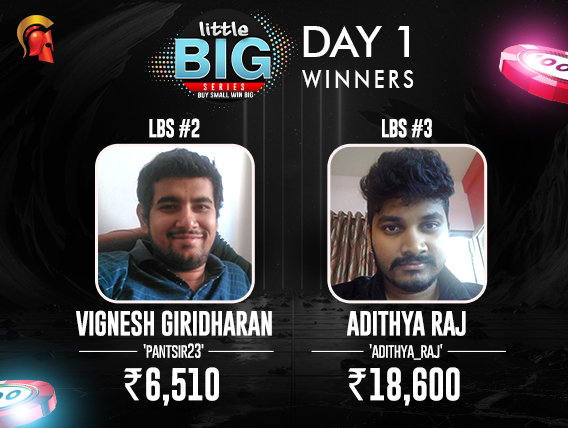 
The Little Big Series (LBS) was an immensely popular series that ran on Spartan Poker every once in a while, but it was off on a brief hiatus for a while before returning to the platform recently. The latest edition began yesterday and will run between 22-27 April 2019 with a series guarantee of INR 22+ Lakh.

Now the specialty of this series is that you can log in, play small buy-in tournaments and still win big on the platform. It’s a low buy-in series for those with smaller bankrolls. Hundreds of players come together to battle it out each time and this time is no different. There’s also added incentive to grind through the series as the LBS Leaderboard winner will be awarded with a brand-new OnePlus 6T smartphone!

Here’s a roundup of what happened on LBS Day 1:

The buy-in of the first tournament was nothing more than INR 55 and 141 unique players registered to this event. The series is known for allowing players to build a bankroll and yesterday, the top 23 spots were paid out a minimum of INR 232, while the biggest prize went to ‘Hj1008’. He/she beat every other entry in the opening event to win the top-prize of INR 4,650 after outlasting ‘kancha’ in heads-up, who won INR 3,150.

The buy-in doubled to INR 110 for the second tournament of the day, which was a Progressive KO event. Here, 136 unique players were a part of the action and eventually, the top 23 players were paid out a min-cash of INR 325. Vignesh Giridharan plays as ‘pantsir23’ on Spartan Poker and yesterday, he topped this field to win LBS #2 and the first-place cash prize of INR 6,510. In heads-up, he got past ‘duurrrr’ who earned INR 4,410 for his runner-up finish.

INR 220 was the buy-in set for the third tournament of the day and series, where 139 unique players joined the field and again, 23 of them were paid out, this time with the min-cash being INR 928. The person to bag the biggest pay-check of the tournament was Adithya Raj aka ‘adithya_raj’, who took away INR 18,600 in winnings. As for the heads-up battle, it was Raj against ‘Harsharya’, with the latter finishing as runner-up and winning INR 12,600 for his run. If you follow Spartan tournaments, you would know that the winner also won a title in the SSS series earlier this month.

Talking about last night’s victory, Raj said, “LBS is a great initiative by Spartan to win more with less. Delighted and happy to ship one on the first day. I would also like to thank Gutshot Magazine for acknowledging the player’s effort. Thank you.”

With a buy-in of INR 330, 161 players joined the tournament by the end of the registration period and 27 of them were paid out by the end of the night, each receiving a min-cash of INR 1,200. The winning player was playing from the FTR platform as ‘buffalosoldier’ took away INR 26,580 in cash for topping the field. In heads-up, he/she beat ‘ROXEEE151’ who won INR 17,940 for coming second best. The final hand was a pre-flop all-in and High Card Ace was enough for buffalosoldier to emerge victorious!

Another five days of similar poker action is set to take place on Spartan Poker’s LBS series, and you could also be one of the winners of this promotion. Regardless, keep following GutshotMagazine.com for timely updates on the ongoing LBS series.