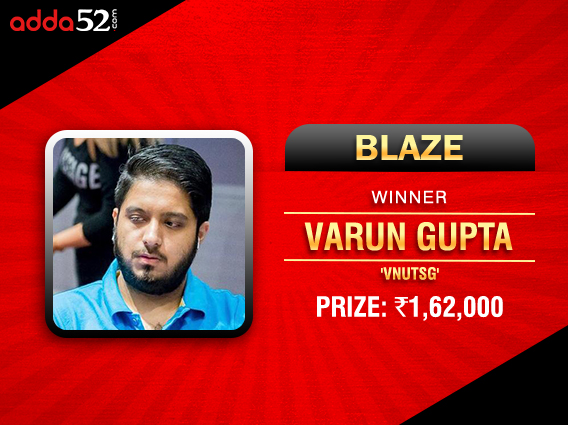 
Adda52 is a brand that’s been around since the start of the industry and has developed itself over the years to rise to the top of the game. They are one of the industry veterans, and have been hosting tournaments, series, promotions and other poker events for quite a while now. Each day of the week, they host their feature high-stakes tournaments on its site.

Monday’s feature tournament on Adda52 is the Blaze INR 6 Lakhs GTD. Yesterday’s Blaze attracted a total of 171 entries, including 78 re-entries. The entrants individually coughed up the reasonable INR 3,300 buy-in for a starting stack of 20,000 each. Total of 17 top places were paid with the minimum cash being INR 9,000.  The tournament began at the usual 8 pm and ended at 12:54 am in the night.

Emerging victorious from the 5-hour grind was the well-known pro Varun Gupta aka ‘VnutsG’. He took home INR 1,62,000 as 1st place cash prize, beating the 171-strong field. Gupta has seen a few wins this year, online as well as live. His name is almost always on the list of people in the money on various online platforms. On PokerBaazi, he won their major tournament– the Moneymaker 5.0, having 1 Crore GTD in May of this year. He even boasts a recorded live 1st place finish, at the APT Finale Macau Main Event last year.

Another one of his live cash outs was at the APPT Manila this August. He has showcased some good poker skills this year and  he’ll be hoping  that this trend continues into the next year as well. With Christmas just around the corner, this last month of 2018 is also lined up with exciting tournaments on all platforms and is a perfect opportunity for someone looking to win big. Commenting on this, Gupta said, “I’m just starting to grind the online tournaments from now. So, it will be a fun ride for me!“