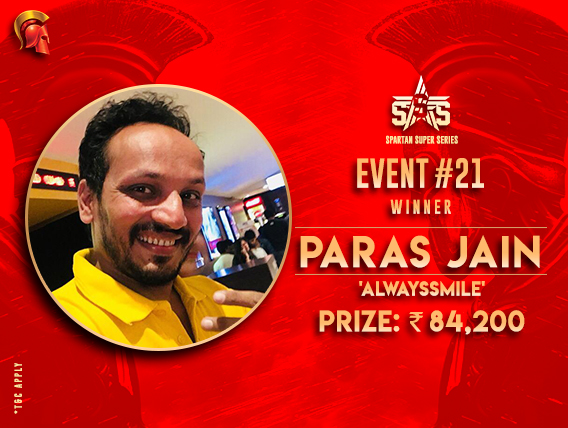 Yesterday marked the fourth day of November’s Spartan Super Series (SSS) edition on The Spartan Poker. A total of five tournaments were scheduled during the day and the biggest of them was the SSS Warm Up which was won by Puneet Dhawan. Apart from that however, four side events took place with four new SSS winners being crowned. The biggest winner of these side events was Jaipur’s Paras Jain!

Here’s a look at them all:

SSS Day 4 began with an INR 550 buy-in re-entry tournament, with a total field of 280 entries registering. The guarantee was slightly missed and the top 24 places were paid out a minimum of INR 1,750. For those who made deeper runs, bigger prizes were kept aside and the player who won the biggest prize of the tournament was Monish Kumar aka ‘Monish1965’, who has been having a great run in this edition of the SSS so far. He has been holding a grip on the SSS Leaderboard right from the start and last night, he won INR 40,250 for shipping this tournament. In heads-up, he beat Neeraj Kumar aka ‘Jannat52’, who won INR 27,038 for finishing second.

The next tournament to kick off on the day had a buy-in of INR 990 and by the end of the registration period, there were a total of 310 entries, which took the prize pool past INR 3 lakh. The top 24 players from this field were paid out INR 3,078 but none took away a bigger prize than ‘Akash0510’, who won the tournament, an SSS title, and INR 68,177 in cash. In heads-up, his final victim was ‘Psychonaut’ who collected INR 46,016 for finishing in second place. The final hand of the tournament saw a pre-flop all-in, where Akash0510 won with Jacks and Fives against his opponent’s pair of Fives which was on the board itself.

Once again, the guarantee of an SSS tournament was passed and a new prize pool of INR 2.22+ lakh was generated, with 337 entries registering in total. From these, the top 27 places were paid INR 2,003. Ultimately, it was ‘md007’ who emerged victorious from this field, taking away INR 48,972 for winning the tournament, while ‘yUDdam’ won INR 33,167 for finishing as runner-up. It was a pre-flop all-in that turned out to be the final hand, where the board opened 3s Tc Ks 4d As and md007 completed an Ace-high flush to beat his opponent’s Aces and Threes.

This was the last tournament to kick off on SSS Day 4 and the winner was the biggest among all the side events on this day – Paras Jain aka ‘AlwaysSmile’ from Jaipur. The tournament had a buy-in of INR 1,100 and a competitive field of 382 entries was formed. From them, Jain was the most dominant on the night, finishing as the last man standing and taking away the top prize of INR 84,200. Beating ‘angelvatsa’ in heads-up was the last nail in the coffin for this player last night, with angelvatsa taking away INR 58,940 for finishing second.

Today is the final day of the SSS series on Spartan and you can stay tuned to GutshotMagazine.com for all updates on the same.