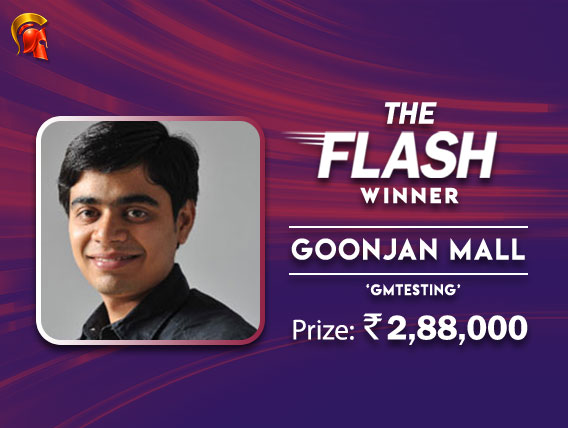 
The Spartan Poker is undoubtedly one of the best poker companies in India and since they offer the highest guarantees and most value in online poker tournaments, you generally see some of the toughest fields participating every night. Last night was yet another example of this fact.

Featured tournaments take place daily on Spartan and yesterday was The Flash INR 12 lakh GTD tournament which is hosted every Thursday night at 7:30pm. 226 entries paid the buy-in of INR 4,400 to join last night’s tournament and from them, the top 20 were eventually paid out a minimum cash prize of INR 16,080.

Goonjan Mall is a player who has become a frequent winner on Spartan in the last few months and last night, he did it again, outlasting every other entry to take down the top prize of INR 2,88,000, which would be another decent addition to his poker bankroll. In the recent past, he has also won the Mega Freeze and Sunday SuperStack on Spartan, while also winning an edition of the Ace Race leaderboard on Adda52.

Yesterday was another flawless performance from Mall on the virtual felts from Spartan, where he beat a number of known pros, playing under the name ‘gmtesting’. Slightly short of a 5-hour grind, the tournament ended by 12:18am this morning when Mall beat Neel Joshi aka ‘Worm33’ in heads-up, another upcoming online player, who settled for INR 1,95,600 for finishing second.

The final hand was played in Level #38 of the tournament, with the blinds at 9,000/18,000 – 2,250 and Mall having a slight chip lead over Joshi. Mall was dealt pocket Queens and he would’ve sniffed the chance of victory. Joshi was dealt pocket Threes and shoved pre-flop, only to get the call from Mall. The board opened 8h 2c 7h Th 2d and gmtesting was declared winner with Queens and Twos.

We spoke to Goonjan Mall after he recorded yet another online poker victory. Speaking about the tournament, he was being a little too humble by saying, “I luckboxed my way to victory, but that’s poker – it’s important to convert on your lucky days. Neel Joshi ‘Worm33’ played very well. I managed not to go bust HU when I had full house and he had quads, and then managed to hold QQ vs 33. So, easy life.”

Gutshot also caught up with the runner-up Joshi, who has also been having a good run in online poker, recently winning the Godfather tournament on Adda52. He said, “I’m glad I made it till heads-up, because I had pretty tough tables from early on, so it wasn’t easy. I simply got cards at the right time.”

If you want to know more about this player, check out Gutshot’s exclusive in-depth interview with him here. Some other known players on the FT was Rubin Labroo aka ‘kornkid’ who finished 6th and Siddhanth Kapoor aka ‘bullzeye’ who finished 7th.