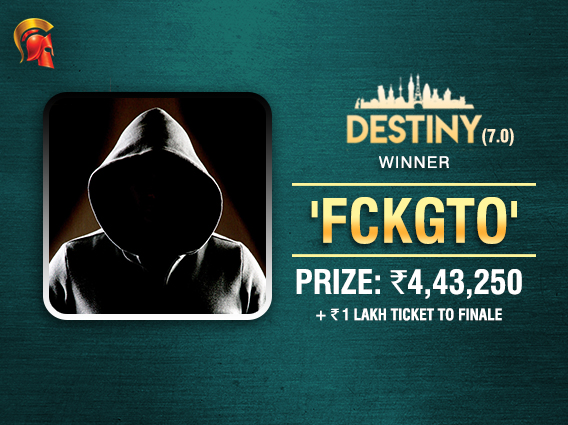 The Spartan Poker is one of India’s most popular online poker platforms and they have some of their own popular tournaments and series too. One of these tournament series is Destiny, which is currently in its seventh edition and the specialty of this series is the fact that one winner wins an international poker package once every ten weeks.

Destiny 7.0 kicked off at the start of this month and yesterday was the third tournament of this edition, played at its usual timing of 7:30pm on Wednesday night. The tournament usually sees participation from some of India’s top pros and yesterday was no different, even though the WPT India series was also taking place simultaneously in Goa.

The tournament lasted nearly 10 hours and that shows how tough the competition must’ve been towards the end. At 5:10am this morning, it finally came to an end thanks to ‘FckGTO’ who wiped out his last opponent to ship the tournament and win the top prize of INR 5,43,250. From this prize money, INR 1 lakh will be deducted towards the players ticket to the Destiny Finale SnG, where he/she can play to win the INR 10 lakh package trip to a prestigious poker festival in Europe.

The player wished to stay anonymous for a specific reason, but also stated that he will reveal his identity if and when he takes down the Destiny Finale SnG. He also gave us some inputs on the tournament, saying, “It was a great experience. I think I played well, and the structure of the tourney was great as usual. On FT itself, I got short a few times but still had enough time to recover. Now, I’m looking forward to the SnG.”

The star-studded Final Table also included Arjanveer Chadha aka ‘instrumental’ who finished in third place for a prize of INR 2,05,000, while Pranav Khandalkar aka ‘pranavpoker’ also made a good run, finishing in 5th place for a little less than a 6-figure score. Khandalkar is known for winning Spartan’s May edition of The Millionaire, while he also shipped Maverick on Adda52 last night.

More known players on the FT were Guneet Kwatra aka ‘guntz’ who finished in 6th place for a pay-out of around INR 71k, while Manoj Pentakota aka ‘MRBLUE’ finished in 7th place for a prize of INR 57k. Keep reading GutshotMagazine.com for updates on the biggest online and live poker tournaments in the country.