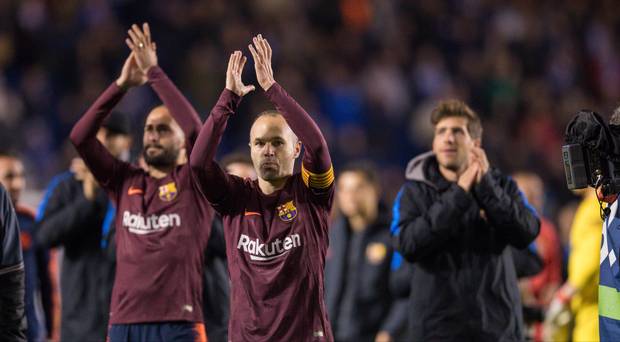 
You have good seasons, you have great seasons and then you have legendary seasons, just like the one FC Barcelona have had in the 2017/18 La Liga. Even though they were unexpectedly knocked out of the UEFA Champions League by Roma earlier this month, they still had a flawless La Liga season.

It took them just 34 matches to secure the league title, with 26 wins and 86 points – 11 points clear of second-placed Atlético Madrid and 15 points clear of rivals Real Madrid (3rd). What is remarkable about this title win from the champion side is that they have remained unbeaten throughout, with 26 wins, 8 draws and ZERO losses. In other parts of the world, Man City won the English Premier League while PSG won the French Ligue 1.

They won that game yesterday 4-2, and it was the magician Leo Messi who scored a hat-trick in the game, consolidating his lead at the top of the season’s goal scorer’s list. He now has 32 goals and 12 assists in the 2017/18 La Liga season, while Cristiano Ronaldo is second, with 24 goals and 5 assists.

This is now the 7th time in the last 10 years that Barcelona have won the league title, while it is their 25th overall title. However, they don’t want to stop here and have targetted an unbeaten season, something which has never happened in La Liga’s current format. “We know how difficult it is to win this league. We were better than our rivals. There is a lot of merit to winning this title without any losses,” said star player Lionel Messi after this win.

We’re sure the celebrations would’ve gone on for quite a few hours in Barcelona last night. Keep reading GutshotMagazine.com for similar football updates!